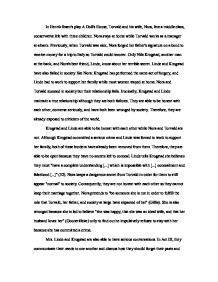 In Henrik Ibsen's play A Doll's House, Torvald and his wife, Nora, live a middle class, conservative life with three children. Nora stays at home while Torvald works as a manager at a bank. Previously, when Torvald was sick, Nora forged her father's signature on a bond to receive money for a trip to Italy so Torvald could recover. Only Nils Krogstad, another man at the bank, and Nora's best friend, Linde, know about her terrible secret. Linde and Krogstad have also failed in society like Nora: Krogstad has performed the same act of forgery, and Linde had to work to support her family while most women stayed at home. Nora and Torvald succeed in society but their relationship fails. Ironically, Krogstad and Linde maintain a true relationship although they are both failures. ...read more.

Nora pretends to "be someone she is not in order to fulfill the role that Torvald, her father, and society at large have expected of her" (Gillis). She is also wronged because she is led to believe "she was happy, that she was an ideal wife, and that her husband loves her" (Goonetilleke) only to find out he impulsively refuses to stay with her because she has committed a crime. Mrs. Linde and Krogstad are also able to have serious conversations. In Act III, they communicate their needs to one another and discuss how they should forget their pasts and move on to live a happy life together. They can communicate well because they do not treat each other as inferiors, which is very dissimilar to Torvald who constantly calls his wife his "little featherhead" (4) ...read more.

Since they have no secrets to hide, they can maintain a healthy marriage. After Torvald finds out Nora's secret, he immediately tells her she has "ruined [his] future" (60) and that he is "in the power of an unscrupulous man" (60). The man refers to the world that will openly criticize him. Nora realizes "her need for rebellion [...], culminating in her walking out on her husband and children to find independence" (Gillis). Although Linde and Krogstad are both failures, they ironically form a bond that is stronger than Nora and Torvald's who live as a normal family and have succeeded in society. Nora and Torvald succeed in society but their relationship fails. Ironically, Krogstad and Linde maintain a true relationship although they are both failures. They are able to be honest with each other, converse seriously, and have both been wronged by society. Therefore, they are already exposed to criticism of the world. ...read more.