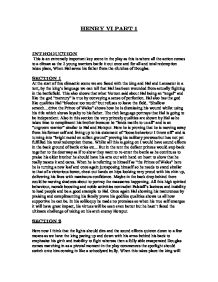 HENRY VI PART 1 INTRODUCTION This is an extremely important key scene in the play as this is where all the action comes to a climax as the 2 young warriors battle it out once and for all and total redemption takes place, When Hal saves his father from the clutches of Douglas. Section 1 At the start of this climactic scene we are faced with the king and Hal and Lancaster in a tent, by the king's language we can tell that Hal has been wounded from actually fighting in the battlefield. This also shows that what Vernon said about Hal being an "angel" and like the god "mercury" is true by conveying a sense of perfection. Hal also has the god like qualities Hal "bleedest too much" but refuses to leave the field. "Shallow scratch...drive the Prince of Wales" shows how he is dismissing his wound whilst using his title which shows loyalty to his father. The rich language portrays that Hal is going to be independent. Also in this section the very princely qualities are shown by Hal as he takes time to compliment his brother because he "lends mettle to us all" and is an "ungrown warrior" similar to Hal and Hotspur. Here he is proving that he is moving away from his former self and living up to his statement of "loose behaviour I throw off" and ...read more.

This is another great stage of his redemption and the audience must be made aware of this by Hal's stance full of high spirits and power after a brief encounter Douglas realises Hal's superior combat skills and flees. At this point the audience need to be aware of how much Hal has saved his father also the father and son bond is really gaining strength. Hal has now proved his worth to Henry and has completely redeemed himself as we can see from "thou hast redeemed thou lost opinion ... tender of my life" this is once again proving to us that Hal can care for Henry he just never showed it before. Whilst all this is being said Henry should have a thankful arm on his sons shoulder and trying to make eye contact. However all the hurt over the years has taken its toll on Hal so he should shy away saying that "did me too much injury" at this point the sounds of battle start to roar and the personal part of this scene shall disappear as Hal still can't accept that his own father thought he "hearkened for his death" then Henry shall depart leaving the audience wondering what's going to happen now that the rift between the heir to the throne has been cured. ...read more.

"for worms brave Percy" this shows how Hal has taken hotspurs qualities when defeating him, it is further telling because of the relationship between "worms" and "words". Hotspur is left as food for worms but he died because he lacked words which are Hal's strongest asset. In finishing hotspurs sentence we can see how much respect Hal has for Hotspur and the audience can now see that with complete silence to let this incident set in with viewers. They can also see how Hal is now regretting killing him a little as maybe they could have formed a friendship. Now Hal should shroud Hotspurs face in feathers showing that he was an excellent warrior and being disloyal to the king cost him his life. However now Hal wants all his shame and bad deeds "not remembered in thy epitaph" whilst Hal is saying about his past going down with Hotspur he should lay his sword down him then cross his arms over it then take a deep breath and pause to let this gigantic air of respect set in. After this Hal should elegantly stand, take a step back and nod like in the battle whilst acknowledging each other combat ability. As for jack Falstaff, Hal shall just walk past him while the stage lightens and subtly shake his head in utter disbelief of this man's sheer cowardice. By Simon Hinchcliffe The end ...read more.