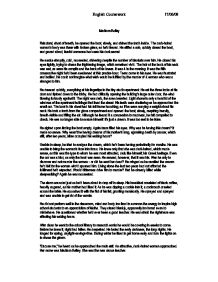 Madison Bailey Reluctant, short of breath, he opened the boot, slowly, and shined the torch inside. The dark-haired woman's body was there with broken glass, as he'd feared. He stifled a sob, quickly closed the boot, and gazed about, fearful someone had seen his dark secret. He awoke abruptly, cold, nauseated, shivering despite the number of blankets over him. He closed his eyes tightly, trying to chase the frightening image, which remained vivid. The hair at the back of his neck was wet, as were his armpits and the back of his knees. It was 4 in the morning. It was the fifth consecutive night he'd been awakened at this precise hour. Tears came to his eyes. He was frustrated and baffled. He could not imagine what wish would be fulfilled by the murder of a woman who was a stranger to him. He dressed quickly, everything at his fingertips in the tiny studio apartment. He set the three locks at his door and tiptoed down to the lobby. He had difficulty opening the building's large outer door, the wind blowing furiously against it. The night was dark, the area deserted. Light shone in only a handful of the windows of the apartment buildings that lined the street. His teeth were chattering as he approached the small car. The knot in his chest had his tall frame hunching, as if he were carrying a weight about his neck. He took a torch from the glove compartment and opened the boot, slowly, respiring heavily, breath visible and filling the air. Although he feared it a concession to madness, he felt compelled to check. He was no longer able to assure himself: It's just a dream. It was too real to be false. He sighed upon finding the boot empty. Again tears filled his eyes. Why was he having this dream? It made no sense. ...read more.

"It's so frustrating, always the same length. I wish it'd go on so I'd have a clue to its meaning, even though it scares me so much. Maybe I've already killed someone and my mind is blocking it out." "I'll tell you what," said the doctor. "I'll have someone look over the unsolved murder files to see if there's anything in there resembling your dream. It may make you feel better initially to know there isn't, but the root of the dream is what's really troubling you. As I get to know you better, I'll be able to help you analyse it." "I know it's crazy, but I'm starting to believe it's my destiny to fulfil the dream - if I haven't already." "I'll write my beeper number on the back of my card. Call me if you need to talk - any time." According to the files, none of the city's unsolved murders resembled the dream, or so the doctor said. James suspected it was a lie rendered to reassure him, to lead him into a prolonged analysis that would cost thousands. He thought about suicide but feared his destiny, if not fulfilled, would follow to his following lifetime. He trembled at the thought that an individual's destiny might be the same in each of his existences, that there was no escaping it. Of all things! He lamented secretly, thinking only a rapist had a worse fate. He wondered if murdering a dark-haired bag lady, whom no one would miss, would end the nightmare. He sensed that destiny would not be so easily appeased, that he would have to kill again, and he had no desire to kill more than once. Despite therapy, the dream occurred more frequently. It now came upon him as soon as he was asleep. His nerves were frayed. He stopped seeing the doctor, who called several times, urging him to return. ...read more.

To his relief, he found only broken glass, nicking a finger. He stared at the trickle, then closed his mouth over it. Suddenly, as he was bent over, the boot was slammed down on his back. He cried out, momentarily paralysed, spine having been struck. He was rendered unconscious by successive blows. Madison Bailey, still reeling from the beating, struggled to lift him into the boot and close it. Upon having regained consciousness, she'd wandered about the dumping ground and fields before finding her way out. She'd reached the service road as James was opening the boot. She groped along the side of the car like a blind woman, and opened the door. She started the engine and rolled down the driver's window halfway, strength giving out. At that moment a car exited the Belt Parkway and passed. She fainted as she called out to the driver. Hours later a patrol car stopped beside the vehicle, whose engine was still running. "Party's over," said the policeman on the passenger side. "You'll have to spring for a motel. There's one down the road." There was no response. "Come on, sit up. We know you're in there." He shined a torch on the front seat. Seeing nothing, he grumbled and stepped out of the car. "Call for an ambulance," he told his partner, springing into action, cutting off the ignition. As he was about to begin mouth to mouth resuscitation, Madison stirred. "You can't off yourself with the window open, doll," said the officer softly. "You must not have wanted to leave us too bad." He felt lumps below her scalp. There was a welt where her hair had covered her forehead. "What's this? What happened?" She murmured. He brought an ear close to her lips. "The boot?" he said, unsure. "Check it out, Mike." The second officer opened the boot, slowly, and shined a torch inside. The body lay crumpled. With long hair before its face, the officer's first impression was that it was female. ?? ?? ?? ?? English Coursework 17/06/08 ...read more.