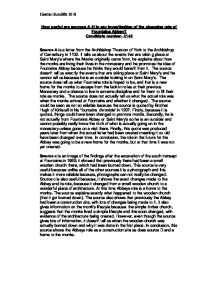 How useful are sources A-H in our investigation of the changing role of Fountains Abbey? Candidate number- 3145 Source A is a letter from the Archbishop Thurston of York to the Archbishop of Canterbury in 1132. It tells us about the events that are taking place at Saint Mary's where the Monks originally came from, he explains about how the monks are living their lives in the monastery and he promotes the idea of Fountains Abbey because he thinks they would benefit from it. The source doesn't tell us exactly the events that are taking place at Saint Mary's and he cannot tell us because he is an outsider looking in on Saint Mary's. The source does tell us what Fountains role is hoped to be, and that is a new home for the monks to escape from the lack in roles at their previous Monastery and a chance to live in extreme discipline and for them to fill their role as monks. The source does not actually tell us what the actual role was when the monks arrived at Fountains and whether it changed. The source could be seen as not so reliable because the source is quoted by Brother Hugh of Kirkstall in his 'fountains chronicle' in 1207. Firstly, because it is quoted, things could have been changed to promote monks. ...read more.

It also doesn't tell us what jobs there were inside the infirmary, the people of the Abbey could be seen as employers. This source may not be reliable because the source is only plans and sometimes plans do not go into action. On the other hand, it is very unlikely that a lot of time would go into creating plans that were not to be used. Source B shows the map of how much land the Abbey owned, as it showed a lot, the Abbey should be quite rich and be capable of carrying out new building constructions. In conclusion, this source shows that the Abbey role was a hospital, Hotel, employers and constructors. Source F is an engraving done by Samuel Buck in the 18th century. The source shows what Fountains Abbey looked like at that time. It shows the Abbey as a piece of art, I can tell this because an artist has actually created the engraving of the Abbey. The engraving shows some of the surrounding areas, and from this you can see the untidy areas around which were seen as 'fashionably untidy' because it was style at that time. It shows the layout of the abbey and its state of ruin, which from this picture doesn't appear really bad. ...read more.

It explains that there are over 10 historical buildings in the area and the remains there of the monastery are almost complete. It tells us of animals that the surrounding areas of the monastery contain, which are most commonly deer of which there are 600 of. It explains that the site is suitable for families, which means all age groups. It gives information on the ornamental lakes and explains that the site is the only word heritage site in Yorkshire. The source does not give any historical information on the Abbey or information on what it looks like or the people who lived there. It also doesn't tell the reader whether entry is free or not, and if it isn't the role of the Abbey is a business. The Abbey in this source is most definitely shown as a tourist attraction, because people come from all over the world to see the area and it is also promoted in pamphlets. Even though this source gives lots of information, it may not be totally reliable because the entire reason for the pamphlet is to advertise the area and promote it, so it would obviously include persuasive materials. However, it cannot be said that the source is useless because it gives exact facts. The abbeys role is no longer a place of religion or a home for the monks, but it is now a tourist attraction and a site belonging to everyone. ?? ?? ?? ?? Heather Sutcliffe 10 B ...read more.