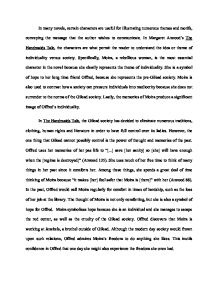 In many novels, certain characters are useful for illustrating numerous themes and motifs, conveying the message that the author wishes to communicate. In Margaret Atwood's The Handmaids Tale, the characters are what permit the reader to understand the idea or theme of individuality versus society. Specifically, Moira, a rebellious woman, is the most essential character in the novel because she clearly represents the theme of individuality. She is a symbol of hope to her long time friend Offred, because she represents the pre-Gilead society. Moira is also used to contrast how a society can pressure individuals into mediocrity because she does not surrender to the norms of the Gilead society. Lastly, the memories of Moira produce a significant image of Offred's individuality. In The Handmaids Tale, the Gilead society has decided to eliminate numerous traditions, clothing, human rights and literature in order to have full control over its ladies. However, the one thing that Gilead cannot possibly control is the power of thought and memories of the past. ...read more.

Janine would exaggerate things in order to get attention from the aunts and seem to be a true believe although she would lie at testifying then admit it was her fault to have been raped in her previous life. While being praised by the aunts, they would tell Janine that she is an example of a good handmaid. In reality though, she lies about the whole story and therefore is not the girl the aunts think she is. Moira, on the other hand, decides to leave the red center by trapping an aunt and stealing her clothes. She impersonates this aunt until she is safe and protected by numerous people. This illustrates that Moira would do anything to escape this regime where as Janine would do anything to be a part of it. Another foil is the one of Moira and OfGlen. They are both rebellious women in the society, but in different ways. ...read more.

By the end of the novel, Offred's thoughts are about the death of her individuality and how she is willing to give up everything to live. At the beginning of the novel, her thoughts represent the careless individualism of a teenager, and further on they represent the freedom of a grown woman. Atwood uses Moira and the memories to illustrate the chain of Offreds thoughts since it contrasts both characters. Moira has never doubted her individuality and she risks her life to fight for her personal freedom. In Margaret Atwood's novel The Handmaids Tale, the theme of individuality versus society is very important and it is clearly illustrated through the character of Moira. Moira is a symbol of hope for Offred since she is not afraid to rebel against the regime. She is also used to illustrate the individuality and conformity of the numerous handmaids in the story. She also represents the individuality of Offred through the handmaid's memories of the past. Margaret Atwood demonstrates this important theme to voice her opinion that, throughout history, an individual will always have the opportunity to choose their destiny. ?? ?? ?? ?? ...read more.