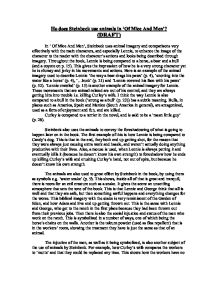 Ho does Steinbeck use animals in 'Of Mice And Men'

Ho does Steinbeck use animals in 'Of Mice And Men'? (DRAFT) In ' Of Mice And Men', Steinbeck uses animal imagery and comparisons very effectively with the main characters, and especially Lennie, to enhance the image of the character to the reader with the character's actions and looks being described through imagery. Throughout the book, Lennie is being compared to a horse, a bear and a bull (and a coyote on p. 15). This gives the impression of how he is a very strong character yet he is clumsy and jerky in his movements and actions. Here is an example of the animal imagery used to describe Lennie 'the way a bear drags his paws' (p. 4), 'snorting into the water like a horse' (p. 4), '...buck' (p. 21) and 'Lennie covered his face with his paws' (p. ...read more.

Also, a mouse is used, when Lennie is always petting it and eventually kills it (because he doesn't know his own strength) to foreshadow how he ends up killing Curley's wife and crushing Curley's hand, not out of spite, but because he doesn't know his own strength. The animals are also used to great effect by Steinbeck in the book, by using them as symbols e.g. 'water snake' (p. 9). This shows, inside all of that is great and tranquil, there is room for an evil creature such as a snake. It gives the scene an unsettling atmosphere that sets the tone of the book. This is that Lennie and George think that all is well and that they are safe, but then something awful happens and everything changes for the worse. ...read more.

This shows how the workers have no power, and are not really wanted on the planet. They are at the very bottom of the social hierarchy. They are at the mercy of fate, with their lack of authority, and their lives, to Curley and his wife, is just as precious as that of a mouse's (Lennie pets the mouse to death). I think this is where the title 'Of Mice And Men' comes from. It's saying about the social injustice of the men, and how their lives are so meaningless and worthless. It could be said that the way Steinbeck really emphases the poor living conditions of the workers by comparing them to animals etc., is taking a stab at the American Dream and that it's a failure, how not every man gets what he wants- some end up with their lives having no meaning, and with their life being no more precious that that of a mouse. ...read more.