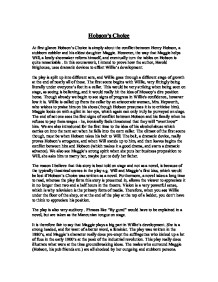 Hobson's Choice At first glance Hobson's Choice is simply about the conflict between Henry Hobson, a stubborn cobbler and his eldest daughter Maggie. However, the way that Maggie helps Will, a lowly shoemaker reform himself, and eventually turn the tables on Hobson is quite remarkable . In this coursework, I intend to prove how the author, Harold Brighouse, uses dramatic devices to effect Willie's development. the play is split up into different acts, and Willie goes through a different stage of growth at the end of nearly all of these. The first scene begins with Willie, very fittingly being literally under everyone's feet in a cellar. This would be very striking when being seen on stage, as seeing is believing, and it would really hit the idea of Mossop's dire position home. Though already we begin to see signs of progress in Willie's confidence, however low it is. Willie is called up from the cellar by an aristocratic woman, Mrs. ...read more.

Vision is a very powerful sense, which is why television is the primary form of media. Therefore, when you see Willie under the floor of the shop, or at the end of the play at the top of a ladder, you don't have to think to appreciate his position. The play is also very auditory . Phrases like "By gum!" would have to be explained in a novel, but are taken as the Mancunian tongue on stage. It is therefore fair to say that Maggie plays a big part in Willie's development. She is a strong headed, and for want of a better word, a feminist. The play was written in the 1880's, and Maggie's character really does pre-empt the suffragettes who kicked up a lot of fuss in the early 1900's at the peak of the industrial revolution. This play really does illustrate what were at the time groundbreaking ideas. The males who surround Maggie (Hobson, his pub friends etc.) ...read more.

The language used in the play is also quite useful to put over the point of class. Willie's course language, and catch phrase "By gum!" constitutes quite nicely to the idea that Willie really is the lowest of the low. Throughout the play, the actor playing Willie has a look of utter shock on his face at the complicated words being used around him by the upper classes, yet by the end of the play William Mossop feels quite at home amongst such people. His last line of the play "By gum!" is simply a satirical and ironic comment referring to his poor beginnings, which is quite sophisticated for a once shoemaker. In summary, Harold Brighouse creates a theatrical masterpiece by virtue of the fact that the story is a play. He also finds just the right blend of language, drama, and contentious themes to keep both a 20th and 21st century audience ruptured, and on the edge of their seats. I think it is fair to say that Hobson's Choice is an achievement in it's genre. ?? ?? ?? ?? ...read more.