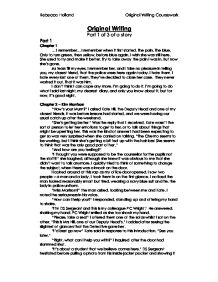 Original Writing Part 1 of 3 of a story Part 1 Chapter 1 ... I remember... I remember when it first started. The pain. The blue. Only to turn green, then yellow, before blue again. I wish she was still here. She used to try and make it better. Try to take away the pain I was in. But now she's gone. As tears fill my eyes, I remember her, and I take no pleasure in telling you, my closest friend, that the police were here again today. I hate them. I hate every last one of them. They've decided to close her case. They never worked it out. That it was him. I don't think I can cope any more. I'm going to do it. I'm going to do what I said last night, my dearest diary, and only you know about it, but for now, it's good night. Chapter 2 - Kim Morrison "How's your Mum?" I asked Kate Hill, the Deputy Head and one of my closest friends. It was before lessons had started, and we were having our usual catch up after the weekend. "She's getting better." Was the reply that I received. Kate wasn't the sort of person to let her emotions to get to her, or to talk about things that might be upsetting her. This was the kind of answer I had been expecting to get so was very surprised when she carried on talking. "The Chemo seems to be working, but I think she's getting a bit fed up with the hair loss! She seems to think that was the only good part of her." "And how are you feeling?" "I thought you were supposed to be the counsellor for the pupils not the staff?!" she laughed, although she knew it was obvious to me that she didn't want to talk anymore. I quickly tried to think of something to change the subject, when there was a knock on the door. ...read more.

Chapter 7 I entered Miss Morrison's office, read the sign 'Head of Pastoral Care' as I did so. As I turned to look into the office I was entering, I saw two people - Leanne and a man I didn't know or recognise. "Take a seat Sandra." Miss Morrison offered me a seat, which I took. She went and whispered something to Leanne and the man, who I presumed at this point was another police officer. They both nodded before turning to me. Miss Morrison sat down as the man started speaking. "My name's John and I believe you already know Leanne." I nodded in response; I wasn't in the mood for talking much. "Err, right, well last night we had a call from your dad to say you'd gone missing," I looked down at my knees, my back hunched over, "where did you go?" I was going to play the 'being dumb' route, but figured that they'd all see through it straight away. This time in reply I shrugged, if I told them I figured they'd ask even more questions than they were going to. Miss Morrison sighed. "We're here to help you sweetheart, not to tell you off." What did they know? I thought to myself. They didn't know anything about my life, nothing about what goes on. "I want to say. I really do Miss. But if he ever found out..." Those damned tears were coming back again, like they always do. I wiped my eyes, tried to clear the what-he-called weakness from my eyes. "Who sweetheart, who are you scared of?" I looked at Miss Morrison, could see that she wanted to help. I couldn't understand how she knew I was scared of him. What else did she know, could she find out? I shook my head, couldn't bring myself to answer. I began to pick at the ladder that was forming in my tights. ...read more.

I couldn't believe my eyes when I saw Sandra McDougal sat there, in the pouring rain! I walked over, see if she's alright I thought. "Hey." I made myself known in the simplest of ways - it was obvious that she was still a little irritated when I received a look, followed by a roll of the eyes. Sad eyes I thought. Mind you, I reminded myself, she did only yesterday admit that her dad committed murder - the murder of her mum. "Can I sit down?" this time a shrug in response. "Why don't we go inside? Get out of the rain?" "No. I like it out here." Well I thought, at least I got a worded response! "Can I talk to you?" Finally! "Of course you can" I replied in a hopefully sympathetic voice. "He used to hit her... before he..." it was obvious she was having difficulty talking about what happened. She was beginning to cry, naturally, I thought. "You don't have to tell me this if you don't want to, if you don't feel ready." She shook her head, so I nodded encouragingly. "She came home early from her night out, it was like the last straw and he lost control..." I noticed she was shaking but I couldn't tell if it was the cold weather or not. "Alright, we're going to go inside. You're shaking" she shook her head. "I'm fine. Honestly" she added seeing my ludicrous look. "Okay." I decided the longer I could keep her talking, the more would come out. "I'm sorry but I have to ask you." I sighed before continuing. "Did he ever hit you?" I looked at her, but there was nothing in return - no look, no nod, no shake, no shrug. It was as if she had frozen. Although I thought I already knew the answer, I prompted her. "Sandra?" She gave one slow nod, before breaking down into a fit of tears. ?? ?? ?? ?? Rebecca Holland Original Writing Coursework ...read more.