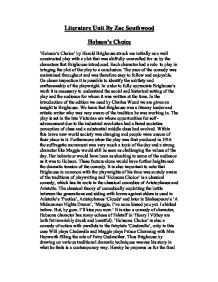 Hobson's Choice' by Harold Brighouse struck me initially as a well constructed play with a plot that was skilfully unravelled for us by the characters that Brighouse introduced. Each character had a role

Literature Unit By Zac Southwood Hobson's Choice 'Hobson's Choice' by Harold Brighouse struck me initially as a well constructed play with a plot that was skilfully unravelled for us by the characters that Brighouse introduced. Each character had a role to play in bringing the plot of the play to a conclusion. The pace of the comedy was maintained throughout and was therefore easy to follow and enjoyable. On closer inspection it is possible to identify the subtlety and craftsmanship of the playwright. In order to fully appreciate Brighouse's work it is necessary to understand the social and historical setting of the play and the audience for whom it was written at the time. In the introduction of the edition we used by Charles Wood we are given an insight to Brighouse. We learn that Brighouse was a literary leader and artistic writer who was very aware of the tradition he was working in. The play is set in the late Victorian era where opportunities for self-advancement due to the industrial revolution had altered societies perception of class and a substantial middle class had evolved. ...read more.

Closer inspection of the characters and the relationships between them will show how Brighouse prepares us for the ending. The relationship between Willie and the sisters starts out with Willie playing a dutiful and respectful cobbler employed by Hobson. He is portrayed as someone lacking ambition and self-confidence although a very good cobbler. Described as 'not naturally stupid but stunted mentally' and the 'raw material of a charming man'. Only Maggie recognises w*****s potential 'everything I've seen, I've liked. I think you'll do for me.' Both Alice and Vicky fail to see w*****s potential 'you're mistaken if you think I'll own Willie Mossop for my brother-in-law.' The sisters continue to underestimate Willie throughout the rest of the play and fail to adapt to the changing situation brought about by w*****s growing self-confidence. Brighouse exploits the comedy of the sister's failure to grasp what is going on. 'Will Mossop hasn't the spirit of a louse.' Maggie's response 'Maybe Wills come on since you saw him, Vicky.' exploits the sisters ignorance and shares with the audience something they are 'in on' that the sisters just cannot see. ...read more.

Willie ascends from the cellar to eventually being his own master 'upstairs'. Further physical metaphors parody the action of the play. Henry Hobson's 'downfall' into Beenstocks cellar and his enforced 'come down' into Oldfield Road before Willie 'comes up' in the world to Chapel Street on his way to St Anne's Square, Manchester. Brighouse carefully manages the characters location to coincide with their fortunes as they develop through the play. Here we get a physical preparation for the final confrontation scene. To conclude Hobson's Choice is as appealing to a modern day audience as to its original audience. The theme of a working class hero making good and bettering himself with a strong driving female partner is still relevant to to-days audience. Although it would not nowadays be seen as challenging or shocking in the same way as it would to its original audience the traditional classical comedy themes remain contemporary. The skill with which Brighouse tells his story using stage devices and popular themes with strong characterisation will ensure that the play will remain popular, for although set in a historic setting the human element will have a timeless quality. . ...read more.