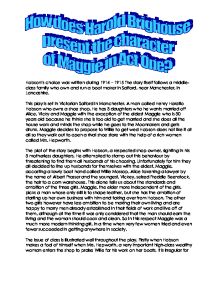 Hobson's Choice - How does Brighouse represent the character os Maggie in Act One?

Hobson's choice was written during 1914 - 1915 The story itself follows a middle-class family who own and run a boot maker in Salford, near Manchester, in Lancashire. This play is set in Victorian Salford in Manchester. A man called Henry Horatio Hobson who owns a shoe shop. He has 3 daughters who he wants married off Alice, Vicky and Maggie with the exception of the eldest Maggie who is 30 years old because he thinks she is too old to get married and she does all the house work and minds the shop while he goes to the Moonrakers and gets drunk. Maggie decides to propose to Willie to get wed Hobson does not like it at all so they walk out to open a rival shoe store with the help of a rich women called Mrs. Hepworth. The plot of the story begins with Hobson, a respected shop owner, sighting in his 3 motherless daughters. He attempted to stamp out this behaviour by threatening to find them all husbands of his choosing. Unfortunately for him they all decided to line up husbands for themselves with the eldest, Maggie, accosting a lowly boot hand called Willie Mossop, Alice tokening a lawyer by the name of Albert Prosser and the youngest, Vickey, seized Freddie Beenstock, the heir to a corn warehouse. This alone tells us about the standards and ambition of the three girls. Maggie, the elder more independent of the girls, picks a man whose only skill is to shape leather, but she has the ambition of starting up her own business with him and taking over from Hobson. The other two girls however have less ambition to be making their own living and are happy to marry men already established in their fields of work and ...read more.

Having decided that Maggie will return, her husband, the now super-confident Will Mossop becomes the dominant partner in Hobson's business and gets his name up on the signboard. A year beforehand he was a lowly boot hand working for 18 shillings a week and now he is a partner in the established business of Hobson's. This progression shows that even in a time where moving up class barriers was very difficult, persistence could pay off. The strength of characters in the play and the progression throughout the play, which covers about a year, is interesting to see. Henry Horatio Hobson begins as the successful widowed father of 3 daughters who appears to have everything going for him in the beginning of the story being the obvious dominant male of house/shop. He starts off as the alpha male in the story, which, in the time would be the father in each household. His decline in stature happens as Willie's ascendancy becomes more obvious. These two things are not coincidental as, from the moment Willie defies Hobson and sets up a boot makers nearby they are in direct competition for the same market. Where Hobson starts as the card-holding male, Willie ends in that position when he dictates the terms in which he and Maggie return to Hobson's. Although it may seem that Maggie also has a great rise in stature, to begin with she is the one running the shop and taking care of Hobson, so she knows all along that she will determine the fate of her and the others around her. She does take a slight rise in stature as everyone else becomes aware in the end of just how much she is running the show. ...read more.

Schooling was not compulsory and many people had little or no education. Alice and Vickey's difficulties with the simple addition sum also illustrate this point. They are trying to balance the books for the business, and part of this balancing involves adding seventeen and twenty-five. Alice says, "What's 17 and 25?" Vickey replies, "Fifty-two, of course". The answer is, in fact, forty-two. Maggie appears to have had an education, as she was the one who used to balance the books before she left, and the business were running fine then. In addition, she educates Willie once they are married in order to prove wrong her sisters and father who thought him to be useless. The character of Maggie also shows the beginning of the Suffragette movement. She is shown to be strong and intelligent, and is not afraid to go against the wishes of her father. Vickey and Alice also show this. This is demonstrated clearly when Maggie decides to marry Will Mossop, and when Hobson reprimands his daughters for dressing fashionably. Vickey tells her father, "We shall continue to dress as we like, father, and you can save your breath." She is telling him that no matter what he says they shall continue to dress, as they want. Hobson's choice was an important play in the early 20th century as it highlighted to a large number of people many of the problems with the society they lived in. Harold Brighouse took some risks in highlighting these issues in such an obvious way but he felt that he needed to convey his feelings as to how things were going wrong and this was his medium for doing so. I think Brighouse aided society by trying to show people that some things that were commonly accepted were wrong, and thankfully, now some of these problems have been vastly rectified. ...read more.