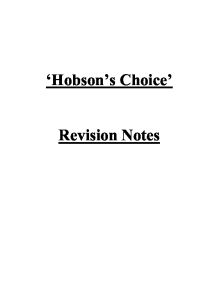 'Hobson's Choice' Revision Notes Hobson's Choice The play was written in 1915 and was first produced in America in 1915. The play is set in Salford, now part of Greater Manchester, in 1880. ACT ONE Scene One The curtains open to reveal the interior of Hobson's Boot Shop in Salford. Hobson's two younger daughters, Alice and Victoria, are at the counter. The door opens from the living quarters and Maggie, Hobson's elder daughter, enters. The girls briefly comment on the fact that their father is late getting up. The reason for his lateness is soon made clear - a late night at a Freemason's meeting, when, no doubt, the drink flowed freely. Albert Prosser enters (26, son of a solicitor and a lawyer himself). It is obvious he has come to see Alice and they have been seeing each other behind Hobson's back. Albert turns to leave as soon as he hears that Hobson is still at home. Maggie's business sense surfaces and she 'persuades' Albert to buy a new pair of boots and leave his old ones for repair. Scene Two We meet Hobson and see the growing conflict between him and his daughters. He is about to go out for his morning drink at the Moonraker's Inn. His daughters tell him to be home in time for his dinner. He sits down and tells them he is tired of being bossed about. He refers to them as 'the rebellious females of this house'. He says he has noticed them getting 'uppish' towards him and he criticises the fashionable styles of dress his youngest daughters have been wearing. Hobson says he will choose husbands for Vicky and Alice because they're not fit to choose their own and scoffs at the idea that Maggie may want to get married. He calls her 'a proper old maid' and says she is past the marrying age. ...read more.

Hobson's proposal to Willie about coming back to his old job shows how out of touch with reality he is. He does seem to genuinely think he is being generous to Maggie and Willie. In the exchange between Hobson and Willie we see how far Willie has come. At the end of Act One, Hobson was taking his belt to Willie and now, Willie is offering Hobson a partnership in his own business. Hobson is completely controlled by Maggie and Willie. He tries to put up a fight but the partnership seems taken for granted and all they have left to argue about is the name of the shop. When it comes to the pinch, Hobson is sensible enough to know where his best interest lies. The play ends with great warmth and affection. When Will first agreed to marry Maggie, he told her, honestly, that he did not lover her. The love at the end of the play is very clear to see. The moving final scene when Maggie insists on keeping her brass ring is full of genuine, sincere feeling. Themes Choice The title itself tells us about this theme - Hobson is left with no choice but to accept what is offered to him. At the end, he has allowed both his character and his business to sink. Doctor Macfarlane says: "Your complaint and your character are the same." It is interesting to think about what earlier choices Hobson could have made to prevent his downfall - perhaps go to the Moonraker's less often! It is arguable how much 'choice' Willie had in his engagement to Maggie. He put up little resistance but was Maggie his escape route from Ada's mother? When Hobson needs rescuing, Alice and Vickey choose their new way of life, leaving Maggie and Willie to follow what they feel duty bound to do. Improvement At the start of the play, Willie is a 'natural fool at all else' other than making boots. ...read more.

Quotations to learn (as well as the ones that are in these notes!) Act One Albert Prosser "I'm terrible hard on bootlaces, Miss Hobson." Hobson "There's been a gradual increase of uppishness towards me" Vickey "We shall dress as we like, father, and you can save your breath" Maggie "If you're dealing husbands round, don't I get one?" Willie "I do a bit. Only it's such a funny print" Jim Heeler "Women are worse than men for getting above themselves" Maggie "I've got the love all right" Ada "I'm trusting him to make the future right" Act Two Tubby "You know what's got by selling clogs won't pay the rent" Alice "I wish I was married and out of it" Freddie "I must say. Your father has turned very awkward" Willie "There's more in kissing nice young women than I thouhgt" Alice "A ring out of stock!" Vickey "I'd start properly or not at all" Maggie "It'll be a grand satisfaction to look back and think about how we were when we began" Albert "but I'm far from saying it's good law" Act Three Willie "I've been learning a lot lately" Maggie "I know which of you three men 'ull be though most of at the Bank" Freddie "Me wash pots!" Albert "Do you want company on your wedding night?" Hobson "You don't sound cordial about the invitation, young man" Maggie "Then there's your cake, and you can eat it" Willie "This 'ull give a lot of satisfaction to a many I could name" Hobson "You're a backward lad, but you know your trade and it's an honest one" Act Four Tubby "It's temper's ruining this shop" Jim Heeler "I think your daughter should be here" Hobson "I'm frightened of myself!" Dr MacFarlane "You've both got your fate written on your faces" Dr MacFarlane "Women are a necessity, sir" Maggie "There's another man with claims on me" Vickey "My child comes first with me" Willie "I'm afraid I bore on him too hard" ...read more.