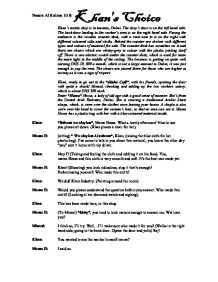 hobson's choiceStudying the Victorian period from Hobson's choice, I rewrote a section of the play in modern times.

Khan's textile shop is in karama, Dubai. The shop's door is on the left hand side. The back door leading to the worker's area is on the right hand side. Facing the audience is the wooden counter desk, with a rack next to it on the right with different coloured silks and cloths. Behind the counter are shelves with different types and colours of material for sale. The counter desk has scratches on it and there are chairs which are whitey-grey in colour with the plastic peeling itself off. There is one electric switch under the counter desk, which is used for main the main light in the middle of the ceiling. The business is getting on quite well earning DHS.10, 000 a month, which is not a large amount in Dubai, it was just enough to pay the rent. The chairs are placed there for those who are higher in society as it was a sign of respect. Khan, ready to go out to the *shisha Caf�*, with his friends, opening the door with quite a shock! Minaal, checking and adding up the two workers salary, which is about DHS 500 each. Enter *Mama* Hessa, a lady of old age with a good sense of manner. ...read more.

Never the less the colours are very elegant. From now on, all my material will be coming from you. You hear that Khan? Khan: Of course, mama. I'll make sure he does his work extra well. Mama H: Suraj, keep that card in a safe place and whenever you move, you wouldn't dare not to tell me. Khan: Oh, you don't worry mama he won't move to any other place. Mama H: How do you know? The boy is a jewel, and as I suspect you treat him like one of your items. Khan: Suraj, that'll do, you can go now. Suraj: Yes, sir. (He exits going to the back door, back to work. Minaal is following him) Mama H: He's a mouse so eager to go back to work. Minaal: (coming back from the workers area) can I take your order for another meter of cloth, mama. Mama H: No thank you. I have enough for now. But mind you I'll send in my daughters and relatives back here and I expect Suraj to make to make the cloth they need. (Khan rushes to the front door so eager to open the door for mama Hessa) Mama H: Ma Salamah. ...read more.

They are both almost always in control and traditional. * Suraj Fernandez-William Mossop They are both low class people and come from a poor family. Willie was abused and brutalized in his childhood were as Suraj was bought, in other words sold for Dhs1000 from his family. As most Indians would do for money. Here in Dubai we had young children who were sold by their parents to be camel racers. Those children were hit and bullied around if their job wasn't done well. Both these men are semi-literate at the beginning of the play and turn out to be charming men at the end. * Raj Malayalam-Tubby Wadlow They both are workers and are poor. Raj has black hair yet Tubby has white. They both have a paunch and stick like legs. * Mama Hessa-Mrs.Hepworth They are both high class people in their times, and are rich. They are both old aged women who are very fussy. The reason I described the daughters of the Hobson and Khan is because in my opinion they are very important people in the play even though they are not all in the scene that I converted. This is because it shows how the characters change from the first impression of the readers and at the end. ?? ?? ?? ?? Nassra Al Rahma 10 B ...read more.