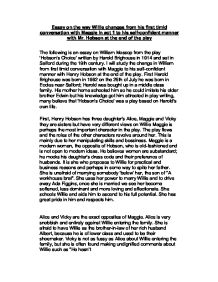 Essay on the way Willie changes from his first timid conversation with Maggie in act 1 to his self-confident manner with Mr. Hobson at the end of the play The following is an essay on William Mossop from the play 'Hobson's Choice' written by Harold Brighouse in 1914 and set in Salford during the 19th century. I will study the change in William from first timid conversation with Maggie to his self-confident manner with Henry Hobson at the end of the play. First Harold Brighouse was born in 1992 on the 26th of July he was born in Eccles near Salford; Harold was bought up in a middle class family. His mother home schooled him so he could imitate his older brother Edwin but his knowledge got him attracted in play writing, many believe that 'Hobson's Choice' was a play based on Harold's own life. First, Henry Hobson has three daughter's Alice, Maggie and Vicky they are sisters but have very different views on Willie Maggie is perhaps the most important character in the play. The play flows and the roles of the other characters revolve around her. This is mainly due to her manipulating skills and bossiness. ...read more.

Willie comes up through a trap door; this shows he has a low rank and not as significant as Hobson and Mrs. Hepworth. on a stage as Willie slowly pops up his head it would be a very humorous way to introduce a new character. From Willie's first word you can tell he is ill educated and I can prove this by the following statements Mrs. Hepworth: "read it" Willie: "I'm trying" This shows he has difficulty understanding a few words, On stage there would be spot lights on Willie and Mrs. Hepworth the lights would be used to make the two talking character stand out from the ones who are just standing there. later on Maggie has a chat with Willie, and he is unenthusiastic and very shy. As they chat she asks him to marry her and his reply "well by gum" this is showing he is simply bewildered and lost for words. When he explains that he is stuck to Ada Figgins, Maggie is enraged and later when Ada brings Willie his dinner; she makes it perfectly clear that Mossop is hers so step aside. On stage the fact two women are fighting for a man would add humor to the seriousness of the scene When Maggie and Willie open a ...read more.

but is corrected by Maggie at the supper after the wedding everyone is present and to everyone's surprise so is Hobson During the last few pages of the play Willie and Maggie issue a proposal to Hobson saying he and Willie are to become business partners Willie decides the new shop will be called 'Mossop and Hobson, Willie also says he will alter the shop saying his old shop chair is better than the cane one Hobson has here this shows he must have immense courage to speak like that in front of his former boss Willie also gives her a new ring but Maggie says he will wear his for show but still were the brass one and at this point it is Willie who kisses her showing that he is a perfect person now good confidence Good vocabulary and a successful trader In conclusion Maggie is the only one who respects Willie but her family believes he is lower class but that changes as the play reaches the end, Willie's confidence also increases, by the end of the play he makes his own decisions and runs his own business. Alice, Vicky and Hobson start to see Willie for the real him, so the play ends with Willie and Hobson becoming business partners. ...read more.