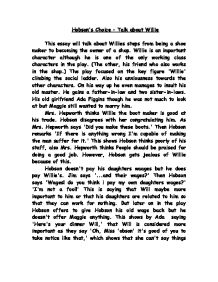 Hobson's Choice - Talk about Willie This essay will talk about w*****s steps from being a shoe maker to becoming the owner of a shop. Willie is an important character although he is one of the only working class characters in the play. (The other, his friend who also works in the shop.) The play focused on the key figure 'Willie' climbing the social ladder. Also his anxiousness towards the other characters. On his way up he even manages to insult his old master. He gains a father-in-law and two sister-in-laws. His old girlfriend Ada Figgins though he was not much to look at but Maggie still wanted to marry him. ...read more.

However, Hobson gets jealous of Willie because of this. Hobson doesn't pay his daughters waages but he does pay Willie's. Jim says '...and their wages?' Then Hobson says 'Wages! do you think i pay my own daughters wages?' 'I'm not a fool!' This is saying that Will maybe more important to him or that his daughters are related to him so that they can work for nothing. But later on in the play Hobson offers to give Hobson his old wage back but he doesn't offer Maggie anything. This shows by Ada saying 'Here's your dinner Will,' that Will is considered more important as they say 'Oh, Miss 'obson' it's good of you to take notice like that,' which shows that she can't say things properly. ...read more.

to put a collar on for Will.' Hobson 'Put a collar on for Willie Mossop' (enraged at idea) Maggie manages to talk him round but he still makes an excuse. 'I'm going to put a collar on, but because my neck's cold.' She has managed to make Hobson put a collar on, but because Hobson is very proud he says the collar is for something else. Throughout the drama, Willie gains importance and eventually buys his own shop, with the help Maggie. Willie grows from being a poor laboring man to a professional shoe maker who earns a lot of money, he gains confidence and near the end Hobson is inferior to Willie. ?? ?? ?? ?? ...read more.