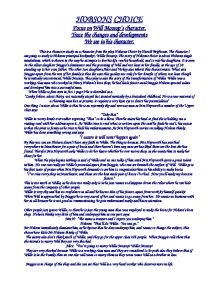 Hobsons Choice - Focus on Will Mossop's character. Trace the changes and developments We see in his character.

HOBSONS CHOICE Focus on Will Mossop's character. Trace the changes and developments We see in his character. This is a character study on a character from the play Hobsons Choice by Harold Brighouse. The character I am going to study is Hobsons principal bookmaker, Willie Mossop. The story of Hobsons choice is about Hobsons single mindedness, which is shown in the way he attempts to live his life, run his household, and to rule his daughters. It is seen In the eldest daughter Maggie's dominance and the grooming of Will and not least in her finally, at the age of 30 standing up to her own father. The other two daughters Alice and Vickey also inherit this characteristic. What sets Maggie apart from the rest of her family is that she uses this quality not only for her benefit of others, not least though he is initially unconvinced, Willie Mossop. Thos play is also the story of the transformation of Willie. Willie was a working class man who worked in Henry Hobson's boot shop, he had little future until Maggie Hobson spotted talent and developed him into a successful man. When Willie is first seen in Act 1 page 9 he is described as a "Lanky fellow, about thirty, not naturally stupid but stunted mentally by a brutalised childhood. ...read more.

When Will is approached by Maggie he is very scared of her and wants to go away from her. He wants no business with her at all because he is not good at communicating, he gets embarrassed easily and hates attention. Other people just ignore Willie, to them he is just the young man that was employed to make the boots for Hobson's boot shop. Hobson thinks very little of him and underpays him as one part says: Mrs H: "The mans a treasure and I expect you underpay him." Hobson: "That'll do Willie. You can go." Mr Hobson immediately dismisses him, as he knows that he does underpay him, and wants to change the subject, this shows how little Mr Hobson thinks of Willie. The sisters also don't think much of Willie, and they go for the upper class rich people. When Maggie tells them that she intends to marry Will they are very shocked. Alice: "You're going to marry Willie Mossop! Willie Mossop! They are very shocked because Willie is a working class man and they are considered to be posh also they believe that if Willie is in the Family then no one else will want to marry them as they wont want Will as a brother in law. ...read more.

Willie has also got more talking ability and can make good speeches. If he had been asked to do a speech in the beginning he would have run away! So this is a great improvement to Willie. Other people recognise the change as Freddie says: " Neat speech indeed" So Willie has changed a lot compared to his old self and the change was for the best. Near the end of the play Willie has changed completely into a new person. He answers back to people and seems to act confident and unshy: "I'll do the arranging Alice. If we come here we come on my terms." When Maggie's sisters here this they think how unlike Will it is and are shocked. This is evidence that Will has moved on and left his shy and bashful side behind for good. The main part of evidence we have that shows us that Willie has changed is when Willie says to Hobson: " Mossop and Hobson or its Oldfield Road for us Maggie." He is even confident enough to argue with Maggie who he seemed so scared of before and he would not have dared to say a thing like that to Hobson either. Will Mossop starts off to be a very cautious boot maker working for Hobson but he is completely transferred, over the years, into a thoughtful, unshy an who has the confidence to run and start his own business. ...read more.