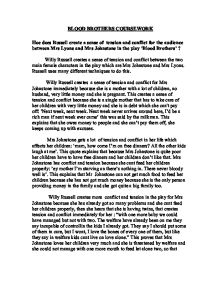 Hoe does Russell create a sense of tension and conflict for the audience between Mrs Lyons and Mrs Johnstone in the play 'Blood Brothers' ?

Mrs Johnstone got so many childrens because her husband was a womaniser. w***y Russell creates a sense of tension for Mrs Lyons because she is the complete opposite of Mrs Johnstone, she is a lone woman with no children although she has got money and a husband. Mrs Lyons has a big house to her self in which she passes time alone while her husband is always away for several months on business. This creates a sense of tension and conflict for Mrs Lyons because she bought a big house for her future children which she doesn't have: 'actually Mrs Johnstone we bought such a large house for the- for the children. We thought children would came along'. This quote proves that Mrs Lyons wants a child it is the emptiness she feels in her life. Mrs Lyons always dreamed about having a child of her own: 'each day I look out from this window, I see him with his friends, I hear him call, I rush down but as I fold my arms around him, he's gone. ...read more.