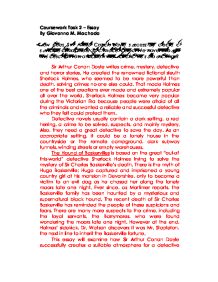 Hound of Baskervilles - How does Sir Arthur Conan Doyle successfully create a suitable atmosphere for a murder-detective novel through his description of Baskerville Hall and its surroundings?

Coursework Task 2 - Essay By Giovanna M. Machado How does Sir Arthur Conan Doyle successfully create a suitable atmosphere for a murder-detective novel through his description of Baskerville Hall and its surroundings? Sir Arthur Conan Doyle writes crime, mystery, detective and horror stories. He created the renowned fictional sleuth Sherlock Holmes, who seemed to be more powerful than death, solving crimes no-one else could. That made Holmes one of the best creations ever made and extremely popular all over the world. Sherlock Holmes became very popular during the Victorian Era because people were afraid of all the criminals and wanted a reliable and successful detective who they felt could protect them. Detective novels usually contain a dark setting, a red herring, a crime to be solved, suspects, and mainly mystery. Also, they need a great detective to save the day. As an appropriate setting, it could be a lonely house in the countryside or the remote campground, dark subway tunnels, winding streets or empty warehouses. The Hound of Baskervilles is based on the great "out-of this-world" detective Sherlock Holmes trying to solve the mystery of Sir Charles Baskerville's death. There is the myth of Hugo Baskerville; Hugo captured and imprisoned a young country girl at his mansion in Devonshire, only to become a victim to an evil dog as he chased her along the lonely moors late one night. ...read more.

At the beginning of the novel, when Sir Henry arrives in London, there is a bearded stranger following his every move. Mr Barrymore is therefore presented as a red herring because he is also a dark bearded man and his quiet manner, appears as a secretive and mysterious man. We are shown Watson and Sir Henry's fear of Baskerville Hall, as Sir Henry says "it isn't a very cheerful place". This shows that the place is not very welcoming and they don't feel comfortable there. The reader can conclude that the setting is perfect for a gothic novel, as it is very mysterious, gloomy and sinister. The setting in The Hound of Baskervilles is typical of a gothic novel and suitable for a murder-mystery because it is mysterious, dark, dreary and dull. Watson describes the moorlands as "sinister hills", and he also comments on the "gloomy curve of the moor", this shows us that Watson seems to be scared of the place. The readers might conclude that the place is in such a horrible state like that, because of the recent crimes which might have happened around there, causing to people to leave the area looking sinister, isolated and vague. The house is described as "a ghost at the farther end", which indicates the house looks very creepy and as Sir Henry himself said "it's enough to scare any man". ...read more.

An example of a metaphor is "...in a few minutes we were flying swiftly down the broad, white road". This describes how fast their car was going, and Sir Arthur Conan Doyle used the word "flying" to exaggerate the phrase. The audience will be able to get a mind image of what that scene looked like, and that is what I think the writer was aiming for. To conclude this essay, The Hound of Baskervilles is a great example of a murder-detective mystery, thanks to the setting created by Sir Arthur Conan Doyle; the mysterious characters, which make the mystery of the murderer even more interesting, and it makes it hard for you to be able to stop reading, and also, the language he used to make the novel more descriptive and so the audience would read it and feel like they were in Sir Arthur Conan Doyle's mind. When he describes the Baskerville Hall and its surroundings, he uses a very descriptive and detailed language, including similes, metaphors and a change from positive to negative words (and vice-versa). The main impression that the characters got from the Baskerville Hall was that it was "enough to scare any man". This description helps the novel become even more mysterious and suspicious, and therefore meaning that Sir Arthur Conan Doyle was able to achieve his aim of creating a suitable atmosphere for a murder-detective novel. ...read more.