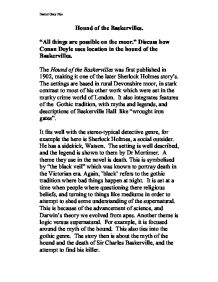 Hound of the baskervilles

Hound of the Baskervilles. "All things are possible on the moor." Discuss how Conan Doyle uses location in the hound of the Baskervilles. The Hound of the Baskervilles was first published in 1902, making it one of the later Sherlock Holmes story's. The settings are based in rural Devonshire moor, in stark contrast to most of his other work which were set in the murky crime world of London. It also integrates features of the Gothic tradition, with myths and legends, and descriptions of Baskerville Hall like "wrought iron gates". It fits well with the stereo-typical detective genre, for example the hero is Sherlock Holmes, a social outsider. He has a sidekick, Watson. The setting is well described, and the legend is shown to them by Dr Mortimer. A theme they use in the novel is death. This is symbolised by "the black veil" which was known to portray death in the Victorian era. Again, 'black' refers to the gothic tradition where bad things happen at night. ...read more.

. Also, the "moon" is out. This is linked to an idea of madness or lunacy being potent with the moon out. In fact, the word 'lunar' come from lunacy. This theme of madness is continued, as the hound is described as 'foaming at the mouth'. This is linked with madness and rabies. The purpose of this story being told is to provide a social and historical background to the case, for Holmes and the reader. Also, 'black' is used to describe the hound. This has connotations of night and evil. This continues with the gothic tradition. On the way to Baskerville hall, the characters reactions are mixed. For example, we have Sir Henry's 'boyish enthusiasm'. It also shows, that although he has travelled the world, he is still excited to come home. This is backed up when Dr Mortimer says "I have never seen a Devonshire man who does not swear by his county'. In contrast to this Conan Doyle uses pathetic fallacy as 'grey melancholy hills' show. ...read more.

"Stunted orchard" is a metaphor for evil twisting everything and making it ugly. It also shows how the moor and surrounding areas are so hostile, nothing can grow properly. At the ed of the novel we are led to believe that Stapleton dies on the moor. This is ironic because it was so dangerous, not even he could master it. However, as the moor is linked to Stapleton, it shows how evil destroys itself. I think Conan Doyle used the moor as the novels location because it is impossible to have it anywhere else, because it would not be realistic. Also, the novel includes many aspects of Gothic tradition, and gothic novels are often set in big country houses. There is a contrast between London and the moor. For example, London is shown as safe. For example, "on either side of a blazing fire" makes the reader feel it is all finished and safe. I think the moor builds tension very well, as it is mysterious and the reader is left with the general impression anything is possible on the moor. Daniel Gray 10je ...read more.