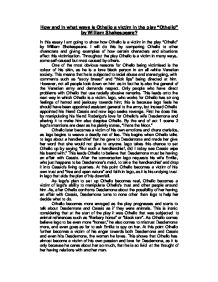 How and in what ways is Othello a victim in the play &quot;Othello&quot; by William Shakespeare?

How and in what ways is Othello a victim in the play "Othello" by William Shakespeare? In this essay I am going to show how Othello is a victim in the play "Othello" by William Shakespeare. I will do this by comparing Othello to other characters and giving examples of how certain characters and situations affect this victimisation. Throughout the play Othello is a victim in many ways, some self-caused but most caused by others. One of the most obvious reasons for Othello being victimised is the colour of his skin, as he is a lone black person in an all-white Venetian society. This means that he is subjected to racial abuse and stereotyping, with comments such as "sooty breast" and "thick lips" being directed at him. However, not all people look down on him as in fact he is also the general of the Venetian army and demands respect. ...read more.

Iago takes this chance to set Othello up by saying "But such a handkerchief, did I today see Cassio wipe his beard with." This leads Othello to believe that Desdemona must be having an affair with Cassio. After the conversation Iago requests his wife Emilia, who just happens to be Desdemona's maid, to take the handkerchief and drop it into Cassio's living quarters. At this point Othello becomes a victim of his own trust and "free and open nature" and faith in Iago, as it is his undying trust in Iago that aids the plan of his downfall. As Iago's plan to set up Othello becomes real, Othello becomes a victim of Iago's ability to manipulate Othello's trust and other people around him. As, after Othello confronts Desdemona about the possibility of her having an affair with Cassio, Desdemona turns to none other than Iago to help her decide what to do. ...read more.

leads to him sacking Cassio and appointing Iago assistant general, but this is no longer enough for Iago as Othello now becomes a victim of Iago's greed and desire for power. All of this amounts to Iago convincing Othello that Desdemona is no good, which leads him to commit the tearful murder of his own wife. To conclude, I believe that there are two main reasons for the victimisation of Othello. The first being the desire, drive and manipulative abilities of Iago. And the second and more important being Othello's nature, his trust in other people to be as good willed as him (before he is twisted by Iago), and his love for Desdemona and Cassio, which eventually leads to drastic and horrendous actions because of his thoughts of their betrayal. Overall it is because he allowed people to take advantage of the good parts of his character, that he became a victim in such a severe fashion. ...read more.