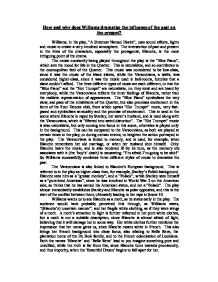 How and why does Williams dramatise the influence of the past on the present?

How and why does Williams dramatise the influence of the past on the present? Williams, in his play, "A Streetcar Named Desire", uses sound effects, lights and music to create a very involved atmosphere. The intersection of past and present in the lives of the characters, especially the protagonist, Blanche, is the most intriguing point of the drama. The music constantly being played throughout the play is the "Blue Piano", which sets the mood for life in the Quarter. This is naturalistic, and so contributes to the cosmopolitan feel of the Quarter. This music was considered to be low-class, since it was the music of the black slaves, while the Varsouviana, a waltz, was considered higher-class, since it was the music used in ball-rooms, luxuries that a slave couldn't afford. The three different types of music are each different, in that the "Blue Piano" and the "Hot Trumpet" are naturalistic, i.e. they exist and are heard by everybody, while the Varsouviana reflects the inner feelings of Blanche, rather than the realistic representation of appearances. The "Blue Piano" symbolises the very slow, sad pace of the inhabitants of the Quarter, but also promises excitement in the form of the Four Deuces club, from which spews "Hot Trumpet" music, very fast-paced and symbolises sensuality and the promise of excitement. ...read more.

wipes her glass as if to show that she hasn't drunk any, as if wanting people to think of her as pure and untouched. Her trouble with alcohol is reflected several times through the play, as she drinks a lot, while pretending not to do so. This shows us that she has something to hide from her friends and family. And she is also very nervous, probably since she's in new surroundings, as she jumps when the "cat screeches". It is interesting how Williams uses music and sound effects to support the scene, like the Varsouviana or the cat screeching. In this case, this accentuates the tension and nervousness in Blanche, and shows the audience that she is close to a nervous breakdown. Blanche's long monologue to her sister is a sign to us of her mental breakdown, exhibiting to us her increasing burden over the years. She seems to be overly selfish, by implying that she was some sort of angel, when she knows she's not: "I did not lie in my heart", a line that is uttered later in the play to Stanley. Blanche paints a very grim picture of her dying relatives, but this morbid recollection gives us an idea of her suffering and sorrow in the past at Belle Reve. ...read more.

But even she knows that everything she does is a fa�ade, as she herself sings, "It's a Barnum and Bailey world, Just as phony as it can be-But it wouldn't be make-believe if you believed in me!", which is contrasted by dialogue between Stella and Stanley, when Stanley takes apart her story. Even Blanche realises that she is living a lie, but doesn't think that anyone else realises that, and that she can continue living in her dream world. Williams tells us that since Blanche couldn't deal with the death around her at Belle Reve, she turned to s*x, to the "kindness of strangers". She has always relied on this to get her through, to make sure that she has a "warm bed to sleep at night". But her past association with many men have given her a reputation in her home town, and this is dramatised by the gradual decay of her mental facilities, as she realises that her act doesn't work any more on men. So unless she finds some permanent shelter, she will be left without anyone who will acknowledge her, "everyone needs to be acknowledged". A Streetcar Named Desire is a very interesting play, in which the playwright, Tennessee Williams, successfully dramatises the influence of the past on the present through the use of music, stage directions and the actions of the characters. ...read more.