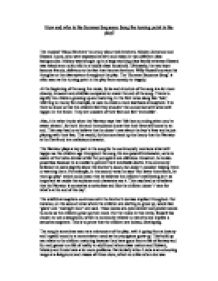 How and why is the Summer Sequence Song the turning point in the play?

How and why is the Summer Sequence Song the turning point in the play? The musical 'Blood Brothers' is a story about twin brothers, Mickey Johnstone and Edward Lyons, who were separated at birth and raised in two different class backgrounds. Mickey was brought up in a large working class family whereas Edward was raised as an only child in a middle class household. Ultimately, the two boys become friends, oblivious to the fact that they are brothers. Willy Russell conveys his thoughts on the class system throughout the play. The 'Summer Sequence Song' is often seen as the turning point in the play from comedy to tragedy. At the beginning of the song the music, lyrics and structure of the song is a lot more dreamy, innocent and childlike compared to nearer the end of the song. ...read more.

However, he is also powerless because he is unable to prevent their inevitable deaths. It is commonly believed he cares slightly about the brother's doom, but doesn't consider helping them or warning them. For example, in the second verse he says 'But leave them alone, let them go play' which could mean that he believes the children's well-being isn't as important as maybe the audience and characters see it. This may lead us to believe that the Narrator is somewhat emotionless and like the children doesn't 'care for what's at the end of the day'. The wistful atmosphere continues with the brother's demise implied throughout. For instance, on the second verse where the children are starting to grow up, words like 'glare' and 'midnight hour' are used. These words are quite sinister and predict worse to come as the children grow up even more. ...read more.

In the next verse, the warnings get a lot more obvious and clear. In this case, the children 'don't even notice the broken bottles in the sand' and 'oil in the water', which justifies that the children are blind to their fate and that there will always be a reminder of the day when the boy's will have their lives taken. Moreover, oil and water doesn't mix, which reminds us of the class differences between Edward and Mickey that will cause them to fall out. Russell wants the Narrator to be a 'moral spokesperson', highlighting the problems with the class system and what problems it can cause. Russell wants the audience to change the way they think about the class system and make a difference. The Narrator serves his Brechtian function by asking the audience whether the death of the brothers was to do with superstition or class. Russell is trying to tell us that class shouldn't matter, but unfortunately it does. ...read more.