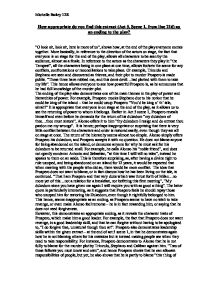 How appropriate do you find this extract (Act 5, Scene 1, from line 216) as an ending to the play?

How appropriate do you find this extract (Act 5, Scene 1, from line 216) as an ending to the play? "O look sir, look sir, here is more of us", shows how, at the end of the play everyone comes together. More basically, in reference to the direction of the actors on stage, the fact that everyone is on stage for the end of the play, allows all characters to be seen by the audience, almost as a finale. In reference to the actors as the characters they play in "the Tempest", all the characters being in one place at one time, allows for/sets the scene for any conflicts, confrontations or reconciliations to take place. Or example, Trinculo and Stephano are seen and discovered as thieves, and their plot to murder Prospero is made public. "These three have robbed me, and this demi-devil...had plotted with them to take my life". This hence allows everyone to see how powerful Prospero is, as he announces that he had full knowledge of the murder plot. The ending of the play also demonstrates one of the main themes in the play of power and hierarchies of power. For example, Prospero mocks Stephano due to his notion that he could be king of the island - that he could usurp Prospero "You'd be king o' th' isle, sirrah?" ...read more.

or become a ruler of the island when it is returned to him (Caliban). It also shows that the whole experience i.e. Prospero's project has worked. However we can also see how Caliban is still a monster, and due to the description of Caliban coming from a noble and reformed man (Prospero), we can believe that this description is in fact true. Prospero reflects the view of the Elizabethan audience in that he says Caliban is "disproportioned in his manners as in his shape" that is to say that outward appearance reflects inward character. This shows a number of things about the character of Caliban, in that it shows an even greater change in Caliban when he realises his wrongs, as even though he still looks like a monster meaning his outward appearance is still hideous, "strange thing as e'er I look'd on", he has taken responsibility for what he has done, and not taken the expected action for someone with a hideous outward appearance, and hence evil character. This is appropriate to include at the end of the play, as it acts almost like a moral to the Elizabethan audience, that outward appearance is not always an accurate way to discover a person's character, as even the most ugly creature can undergo a transformation of character, to become inwardly, not ugly even though the outer appearance remains unchanged. ...read more.

Let me not...dwell in this bare island by your spell". This links not only to play itself, in that it is not completely finished by Shakespeare, and requires the audience's imagination to decide the conclusion of the play, but it links to Shakespeare's theatre, and Shakespeare's magic of creating plays. The epilogue is a way of asking the audience to show whether they enjoyed the play by applauding, "release my from my bands, with the help of your good hands...gentle breath of yours my sails must fill, or else my project fails...let your indulgence set me free". If the audience did not enjoy the play, then Shakespeare has no power, and hence "project" refers not only to Prospero's project to return power and reform characters, but to Shakespeare's writing, which is worthless without approval of the audience. Hence, in conclusion the ending is appropriate as it gives the audience the power to decide the ending, and the result of Prospero's project, and whether he deserves to rule as a duke, or remain trapped on the island, and because it shows how without the audience, Shakespeare's plays are worthless. Therefore although the ending shows some uncertainty as to whether people are truly transformed, the final speech shows that it is not Shakespeare's job to decide the result of the play, with relation to both the characters, and whether or not the play is a success. Michelle Bailey 12R ...read more.