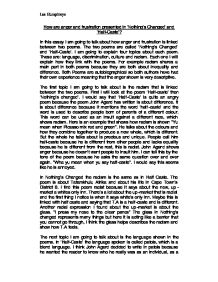 How are anger and frustration presented in 'Nothing's Changed' and 'Half-Caste'?

How are anger and frustration presented in 'Nothing's Changed' and 'Half-Caste'? In this essay I am going to talk about how anger and frustration is linked between two poems. The two poems are called 'Nothing's Changed' and 'Half-Caste'. I am going to explain four topics about each poem. These are: language, discrimination, culture and racism. Each one I will explain how they link with the poems. For example racism shares a main part in both poems because they are both about inequality and difference. Both Poems are autobiographical so both authors have had their own experience meaning that the anger shown is very descriptive. The first topic I am going to talk about is the racism that is linked between the two poems. First I will look at the poem 'Half-caste' then 'Nothing's changed'. I would say that 'Half-Caste' is quite an angry poem because the poem John Agard has written is about difference. It is about difference because it mentions the word 'half-caste' and the word is used to describe people born of parents of a different colour. This word can be used as an insult against a different race, which shows racism. Here is an example that shows how racism is shown "Yu mean when Picasso mix red and green". ...read more.

This is a sign of anger and frustration in the poem. In 'Nothing's changed' the language shown is quite different. T.A uses angry language to express his feelings about the situation going on. He uses this angry language because he has experienced racial discrimination and he uses anger to describe how he felt and what happened at district 6. "Hands burn for a stone, a bomb, to shiver down the glass." This quotation is from the end of the poem and it means that the boy wants to get a stone or a bomb and to throw it at the glass so he can get in to the inn. The boy cannot get into the inn though because is not allowed, he is not allowed because he is different and because they are racist to him. This quote says a lot about T.A's anger against people who are racist. Between the two poems the language features shown in both of them are a bit differently shown but the explanation and meaning of the anger in both poems is about the same. Apart from racism and language in these poems there is discrimination seen in both. First of all in 'Nothing's Changed' I think the racism links together with the discrimination. ...read more.

In 'Half-Caste' I think the poem is mainly directed against white people. I think this because the term 'Half-Caste' is used against different coloured people meaning that white people who are racist would say it. The text is very angry meaning that J.A is being called half-caste and he is explaining what a half-caste is. The poem is against white people though because white people are accused of being racist. In Nothing's changed the culture is slightly different unlike 'Half-Caste'. I would say that the culture in 'Nothing's Changed' is similar to the poem 'Half-caste' because it is about white people again except the poem isn't against them it's just about them. T.A had returned to District 6 only to find white people there and in the poem he explains about how they are here and how he is treated. I would say that the culture in this poem is about coloured people versus the white people and how they battle it out. But in the poem T.A uses angry language to describe how he feels about himself and the white people. Now you have read all the topics hopefully you can see why these poems contain anger and frustration. It is because of the result of racism, discrimination, language and culture. Both the authors of the two poems used some kind of anger to describe how they felt by using the example of one of these topics. Lee Humphreys ...read more.

This essay has many good points. It is very clearly and logically structured and uses topic sentences to refer to the question.
The essay clearly compares the two poems and looks at the similarities rather than any differences in the two poems.
The writer makes insightful comments which are discussed in detail.
More quotes are needed in places.
There is too much repetition of key words and phrases and ideas and points are sometimes repeated too often.
*** 3 stars.