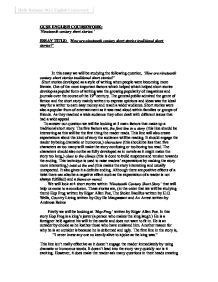 GCSE ENGLISH COURSEWORK: 'Nineteenth century short stories.' ESSAY TITLE: 'How are nineteenth century short stories traditional short stories?' In this essay we will be studying the following question, 'How are nineteenth century short stories traditional short stories?' Short stories developed as a style of writing when people were becoming more literate. One of the most important factors which helped which helped short stories develop as popular form of writing was the growing popularity of magazines and journals over the course of the 19th century. The general public admired the genre of fiction and the short story mainly written to express opinions and ideas was the ideal way for a writer to earn easy money and reach a wider audience. Short stories were also a popular from of entertainment as it was read aloud within families or groups of friends. As they reached a wide audience they often dealt with different issues that had a wide appeal. To answer our question we will be looking at 5 main factors that make up a traditional short story. The five factors are, the first line in a story (this line should be interesting as this will be the first thing the reader reads. This line will also create expectations about the kind of story the audience will be reading. It should engage the reader by being dramatic or humorous,) ...read more.

In the story there are only 3 characters which are mainly used, they are the Bacteriologist, his wife Minnie and the Visitor (who turns out to be an anarchist.) As you can see the numbers of characters in this short story are limited, as well as that the description is also limited however the only person to get describe was the visitor, "The lank black hair and deep grey eyes, the haggard expression and nervous manner," This is all that was said of the visitor and nothing more. The other two characters were not described much but Minnie kept calling the Bacteriologist mad which could be a style of description. In the story you can find some clues to the climax. Firstly when the Bacteriologist explains to the visitor how a drop of the cholera germ can kill many and secondly when the visitor runs off with the germ. The twist to the story was much unexpected and caught me out of the blue. The anarchist thinking he drank the cholera germ actually drank a germ that will turn him blue. H.G. Wells creates this twist very well all the time mentioning cholera when actually it was something else. However it does not give the story a definite ending as we do not know what happened to the visitor. Did he turn blue? ...read more.

The third area is clues to the climax. We have looked at this area in all of the stories. Many of them give clues to the twist and create much suspense throughout the story. The fourth area is a twist at the end. Nearly all the stories have a twist, some which are much unexpected such as the one in 'The Stolen Bacillus'. The fifth and final area is a theme or moral. Not all the stories have a moral to their ending but their theme can be seen through out the story. Such as the theme in 'Country living' (which is making choices.) This can bee seen in all the areas of the story, starting from when Madame Henri d'Hubieres comes with an offer to buy their son. The parents have to choose if they want to or not. This is the major choice made in the story and made a great impact to the ending of the story. The language used in the stories is very typical to short stories and the century it was written in. The writers use short sentences to quicken the pace of the story and words which have simple meanings. I will finish off by saying 'Nineteenth century short stories' are traditional short stories as they follow all the areas which makes a short story good and interesting. ...read more.