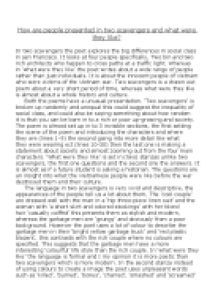 ﻿How are people presented in two scavengers and what were they like? In two scavengers the poet explores the big differences in social class in san Francisco. It looks at four people specifically, Two bin and two rich architects who happen to cross paths at a traffic light. Whereas in ?what were they like? the poet writes about a wide range of people rather than just individuals. It is about the innocent people of Vietnam who were victims of the Vietnam war. Two scavengers is a drawn out poem about a very short period of time, whereas what were they like is almost about a whole history and culture. Both the poems have a unusual presentation. ?Two scavengers? is broken up randomly and unequal this could suggest the inequality of social class, and could also be saying something about how random it is that you can be born in to a rich or poor up-growing and society. The poem is almost set up in to 3 invisible sections, the first setting the scene of the poem and introducing the characters and where they are (lines 1-9) ...read more.

This suggests that the garbage men have a more interesting ?colourful? life style than the rich couple. In ?what were they like? the language is formal and I my opinion it is more poetic than two scavengers which is more modern. In the second stanza instead of using colours to create a image the poet uses unpleasant words such as ?killed?, ?burned?, ?bones?, ?charred?, ?smashed? and ?screamed? to give a vivid image of war and destruction. The first stanza of what were they like is set in the past tense - it is asking what there were like rather than what they are this is almost telling us that they are no longer like this even before we have heard the real answers. Two scavengers is written in present tense which gives it urgency that this divide in society is happening now. The poem is constantly comparing the two sets of people, and in one part it shows us how they are actually very alike- the younger of the garbage men ?also has sunglasses and long hair? and is about age same age as the Mercedes driver. ...read more.

The last line ?across that small gulf in the high seas of this democracy? is very powerful and is suggesting that the social indifference exists on a much wider scale. ?What were they like? is an anti war poem and you can feel how strongly the poet feels about it, the last line is also very powerful ?their singing resembled the flight of moths in moonlight. Who can say? It is silent now? this sums up the whole poem and hits you very hard. In ?what were they like? the Viennese people are presented as very innocent and peaceful people and almost like children ?their life was in rice and bamboo?. Both poems are similar in the fact that they both have a unusual presentation, and that they are both making a strong political comment, however they are also very different in that two scavengers is about one small event and what were they like is about a very big event and a whole culture and group of people. My favorite poem of the two is ?what were they like?, I think it is more poetic and powerful. ...read more.