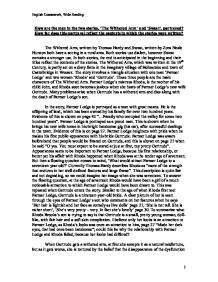 How are the men in the two stories, 'The Withered Arm' and 'Sweat', portrayed? How far does this portrayal reflect the contexts in which the stories were written?

How are the men in the two stories, 'The Withered Arm' and 'Sweat', portrayed? How far does this portrayal reflect the contexts in which the stories were written? The Withered Arm, written by Thomas Hardy and Sweat, written by Zora Neale Hurston both have a setting in a rural area. Both stories use dialect, however Sweat contains a stronger use. In both stories, the end is anticipated in the beginning and their titles reflect the contexts of the stories. The Withered Arm, which was written in the 19th Century, is partly set on a diary farm in the imaginary village of Holmstoke and town of Casterbridge in Wessex. The story involves a triangle situation with one man 'Farmer Lodge' and two women 'Rhoda' and 'Gertrude'. These three people are the main characters of The Withered Arm. Farmer Lodge's mistress Rhoda, is the mother of his child John, and Rhoda soon becomes jealous when she hears of Farmer Lodge's new wife Gertrude. Many problems arise when Gertrude has a withered arm and dies along with the death of Farmer Lodge's son. In the story, Farmer Lodge is portrayed as a man with great means. He is the offspring of land, which has been owned by his family for over two hundred years. Evidence of this is shown on page 42 "...Family who occupied the valley for some two hundred years". Farmer Lodge is portrayed as a proud man. This is shown when he brings his new wife home in his bright handsome gig (his car), after successful dealings in the town. ...read more.

Farmer Lodge is uncaring towards Rhoda for the fact that she has had his son and he does not keep in contact with him, and he is even able to ignore his son completely and publicly on page 29. Farmer Lodge does not appear to have contributed any of his large wealth towards the upkeep of Rhoda and their son. Farmer Lodge is satisfied being a high known social figure and a successful businessman. As long as his status is good publicly and he looks good, he is content. I think that Farmer Lodge is portrayed as a deceitful person, someone who uses someone to get something. In order for Farmer Lodge to look better, being with a pretty woman would gain more respect, but as soon as Gertrude's arm becomes withered and as soon as John (his son) dies he disappears with a gloomy behaviour. Sweat, which was written in the 20th Century, has a setting in Florida - the Deep South. Husband and wife, Sykes and Delia live together. Delia experiences mental and physical abuse almost every day from her husband. Delia helps feed Sykes with her sweat and blood and in return gets nothing. Delia is a hardworking washwoman and Sykes is an unsympathetic abusive husband. He is portrayed as an uncaring man throughout the story. Sykes enjoys watching Delia suffer. An example of this is when Sykes brought a whip into the house. Sykes knew it would remind Delia of her phobia of snakes, and she is petrified of snakes. ...read more.

One of the things that affected the men's portrayal in the stories were society. Both Framer Lodge and Sykes had the upper hand in situations, and they caused distress to the women; Farmer Lodge by not taking care of Rhoda and his son and the gloomy behaviour when Gertrude had her withered arm, and Sykes by abusing Delia. Due to the times at which both stories were written, this type of behaviour from men was common and accepted by women. It was disregarded as walking out on your husband because you are there to please him, just as Gertrude was doing by going to extreme measures to cure her arm as Farmer Lodge was so impressed by looks and just as Delia was doing by working her 'sweat and blood' to keep Sykes alive and fed. The society in which Sykes and Delia was in made Sykes isolated because he was black, so when he came home he felt powerful by doing those thing to Delia as he is not powerful when he goes out due to the 'white on black' situation. Wealth was a factor, which affected the portrayal of both men. Farmer Lodge was an upper class man with pride, and this pride led him to show of his externals e.g. Gertrude and his business rather than to be content with his internals and look after his offspring. The same applied to Sykes, because he was not working and Delia brought all the money home he felt powerful and proud of the fact he has the upper hand and this made him act ruthlessly towards Delia. English Coursework, Wide Reading 1 ...read more.