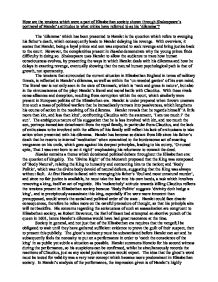 How are the tensions which were a part of Elizabethan society shown through Shakespeare's portrayal of Hamlet's attitudes to what critics have referred to as his 'dilemma'?

How are the tensions which were a part of Elizabethan society shown through Shakespeare's portrayal of Hamlet's attitudes to what critics have referred to as his 'dilemma'? The 'dilemma' which has been presented to Hamlet is the question which refers to avenging his father's death, which consequently leads to Hamlet delaying his revenge. With overview, it seems that Hamlet, being a loyal prince and son was expected to seek revenge and bring justice back to the court. However, the complexities present in Hamlet demonstrate why the young prince finds difficulty in doing so. Shakespeare uses Hamlet to allow the audience to trace how human consciousness evolves, by presenting the ways in which Hamlet deals with his dilemma and how he delays in exacting revenge, eventually showing that the natural human psychological path is that of growth, not spontaneity. The tensions that surrounded the current situation in Elizabethan England in terms of military threats, is reflected in Hamlet's dilemma, as well as within the 'un-weeded garden' of his own mind. The literal war is not only seen in the state of Denmark, which is 'rank and gross in nature', but also in the circumstances of the play: Hamlet's literal and moral battle with Claudius. ...read more.

Hamlet is placed where repellent forces of society compel him in more than one direction, which cloud his judgement to seek vengeance, causing him to reach an awkward stalemate for the greater part of the play. Hamlet is initially caught between two codes of honour: the chivalric code of honour expects Hamlet to avenge his father's death, whereas the Elizabethan code of honour forbids the questioning of the king's divine authority, and also forbids the notion of revenge as set by the state and church. Hamlet also finds himself suspended between Catholicism, the religion that dominated Court politics, with which he was encouraged to align himself with, and Protestant Lutheranism, whose influence came from Hamlet's education at the Protestant establishment at Wittenberg. These conflicting religious doctrines cause Hamlet to become torn between the two supposedly moral paths to take. Lutheranism forces Hamlet to question the ghost's validity because it holds a strong belief that Purgatory does not exist, and therefore the apparition of the ghost would be h**l-sent to tempt Hamlet into committing a mortal sin that would send him to eternal damnation. However the ghost can be seen in terms more closely aligned with Catholic belief and doctrine, appealing to Hamlet in Catholic terms and in terms of a medieval revenge code. ...read more.

Whilst considering this flaw, it is important that Shakespeare makes us realise that the common goal for ultimate perfection is unattainable and that this method of self persuasion is one which is continuously taking place in the human mentality, thus reminding us again that Hamlet is merely a mortal, hence the tension is relieved from the shoulders of Hamlet and the pressure lifted from Elizabethan society. The tensions which were a part of Elizabethan society are shown as a development of a humanity which Hamlet assumes when faced with his dilemma. We are able to recognise how Shakespeare portrays these attitudes by studying the way in which Hamlet reacts to specific scenarios. On the surface it can be accepted that Hamlet's periods of reflection and melancholia contribute to his delay. The amount of time passed is insignificant in comparison to the process of thought and the revelation of mortality which takes place in Hamlet's psyche. But it is also true that both Hamlet's distemper and delay result from and are appropriate to the perplexing and dangerous task that fate has thrust upon him. It is not until the end of the play that Hamlet begins to accept fate as part of life, which in order for it to be pursued successfully, must be initially accepted. ...read more.