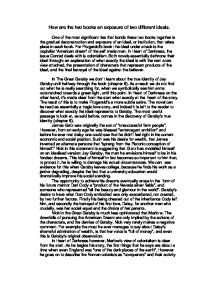 How are the two books an exposure of two different ideals - The Great Gatsby - Heart of Darkness.

How are the two books an exposure of two different ideals. One of the most significant ties that bonds these two books together is the gradual deconstruction and exposure of an ideal, or institution, that takes place in each book. For Fitzgerald's book the ideal under attack is the capitalist 'American dream' of the self made man. In Heart of Darkness, the issue Conrad deals with is colonialism. Both novels essentially dethrone their ideal through: an explanation of what exactly the ideal is with the narrators view attached, the presentation of characters that represent products of the ideal, and the final betrayal of the ideal against the believer. In The Great Gatsby we don' t learn about the true identity of Jay Gatsby until halfway through the book (chapter 6). As a result we do not find out what he is really searching for, when we symbolically see him arms outstretched towards a green light, until this point. In Heart of Darkness on the other hand, it's made clear from the start what exactly at the heart of the story. The result of this is to make Fitzgerald's a more subtle satire. The novel can be read as essentially a tragic love story, and indeed it is left to the reader to discover what exactly the ideal represents to Gatsby. ...read more.

Tom speaks to him in a totally superior manner, and plays cruel games flaunting his business in front of George. What is more, he feels totally at ease with conducting an affair with George's wife, this adds to the image of tom that believes the lower classes exist for his benefit. This promiscuous aspect to Tom's character leads onto another central flaw that is highlighted in The Great Gatsby, but not in Heart of Darkness, which is careless hedonism and indulgence. The wealthy in Fitzgerald's book seem interested only in "being rich together", and what this entails is mere indulgence as demonstrated by Tom's affair. A critical chapter in this that explores this is chapter two, when Tom takes Nick, Myrtle and a couple called the McKee's to a New York apartment. In this chapter we see Myrlte's shallow worship of material possessions. The apartment is "crowded to the doors" she blatantly is more concerned with showing off her wealth than keeping the apartment practical. Myrlte also changes her dress and 2with the influence of the dress her personality had also undergone a change". This remark seems to emphasise the superficiality of these people, only truly shallow people are what they wear. ...read more.

Similarly in Gatsby's story we see how the ideals on which America was founded have metamorphosed into something quite different. However, without the blatant exposition of the ideal that exists at the beginning of Conrad's novel, we only see the wider context at the end. Indeed the very last line is key: "So we beat on, boats against the current, borne back ceaselessly into the past". Specifically this line is referring to Gatsby's lifelong quest to transcend his past that is ultimately shown to be futile. However Nick at the end of the book also mentions the "old island" that met the first settlers. By doing this he is linking Gatsby's fate to America as a whole. Fitzgerald is telling us that America (like colonialism) was founded on ideas of progress and equality. The America envisioned by its founders was a land made for visionary dreamers like Gatsby to thrive in. instead, people like Tom and Daisy Buchanan have recreated the faults and excess of the European Aristocracy in the new world. For all his wealth and greatness Gatsby could not become part of their world. Fitzgerald's America is emphatically not a place where anything is possible: just as America failed to transcend its European origins, Gatsby too cannot overcome the circumstances of his upbringing. The American dream by the end of the novel has deteriorated into the crass pursuit of wealth ...read more.