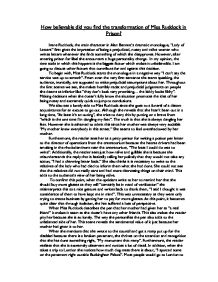 How believable did you find the transformation of Miss Ruddock in Prison?

How believable did you find the transformation of Miss Ruddock in Prison? Irene Ruddock, the main character in Alan Bennett's dramatic monologue, "Lady of Letters" first gives the impression of being a prejudiced, nosey and na�ve woman who writes letters whenever she finds something of which she disapproves. However, after entering prison for libel she encounters a huge personality change. In my opinion, the time scale in which this happens is the biggest factor which makes it unbelievable. I am going to discuss other factors that contribute for and against this decision. To begin with, Miss Ruddock starts the monologue in a negative way "I can't say the service was up to scratch". From even the very first sentence she starts speaking, the audience, ironically, are supposed to make prejudicial assumptions about her. Throughout the first scenes we see, she makes horribly r****t and prejudicial judgements on people she deems as inferior like "they don't look very promising... the kiddy looks filthy". Making decisions when she doesn't fully know the situation promotes the idea of her being nosey and extremely quick to jump to conclusions. We also see a lonely side to Miss Ruddock since she goes to a funeral of a distant acquaintance for an excuse to go out. ...read more.

The way she judges people on how they look and act adds to the idea of her being prejudiced, "this other side's Asians so they won't know what's normal" although I don't think that the audience would condemn her for this as it is partly the generation in which she grew up. Another criticism she makes is when she says, "he has a tattoo anyway". This seems as if she is saying that just because he has a tattoo, she deems him socially inferior because people with tattoos are violent people. When she finally seeks help and goes to the doctor, he isn't very helpful and just gives her some pills to give her a balanced view on things. In my opinion, she doesn't need tablets, she needs psychiatric help. She is not very keen on taking pills either "I didn't want anymore tablets" but the doctor just dismisses her like the rest of society. The vicar also fails to understand Miss Ruddock and tries to force her into religion and does not succeed. When the vicar is talking to her she takes a very pessimistic view of love and Christianity, "You're barking up the wrong tree, I'm an atheist". This shows that she is very stuck in her ways and slightly stubborn to see other people's views. ...read more.

Even when Geraldine makes fun of Shirley, she sticks up for her and tells Geraldine to "f**k up". Bennett uses humour to show that the overall mood of the monologue has lifted. Irene even starts occasionally smoking although "I shan't ever be a full-time smoker". This shows that she is a lot more open to more modern ideas. Before her time in prison, she almost certainly wouldn't believe in s*x before marriage but now she even states that she would feel more comfortable in that situation since "Bridget has taken her through the procedure step by step". Her naivety seems to have lessened as well, as she realises that it probably never going to happen at her age. However she still lacks understanding since she has been isolated for so long. In conclusion, I think that the transformation of Miss Ruddock into Irene is not completely believable because the time scale in which this happens is minute. Other factors also contribute to my decision such as, the portrayal of a women's prison to be a jolly place. However, the dramatic change in Miss Ruddock was demanded by the situation that she found herself in and people are able to change in different environments. Overall, I do not think the transformation in Miss Ruddock is entirely believable but the point Bennett makes about the human capacity to change is nonetheless credible. ?? ?? ?? ?? ...read more.