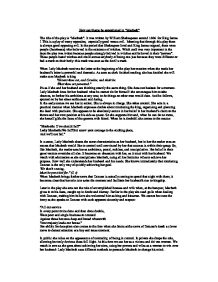 How can blame be apportioned in "Macbeth" The title of the play is "Macbeth". It was written by William Shakespeare around 1606 for King James I. This is a play of many opposites, especially good versus evil. Meaning that through this play there is always good opposing evil. In the period that Shakespere lived and King James reigned, there were people (Jacobeans) who believed in the existence of witches. Witch craft was very important in the days the play was witten because people strongly belived in witches and believed in their "powers". These people hated witches and could accuse anybody of being one just because they were different or had a mark on their body: this mark was seen as the devil's mark. When Lady Macbeth receives the letter at the beginning of the play her reaction when she reads her husband's letter is powerful and dramatic. As soon as she's finished reading, she has decided she will make sure Macbeth is king "Glamis thou art, and Cawdor, and shalt be What thou art promised." It's as if she and her husband are thinking exactly the same thing. She does not hesitate for a moment. Lady Macbeth does for her husband what he cannot do for himself: she encourages him to take chances, to further his ambitions at any cost, to do things no other man would dare. And he follows, spurred on by her sheer enthusiasm and daring. In the early scenes we see her in action. She is always in charge. She takes control. She acts in a practical manner when Macbeth expresses doubts about murdering the king, organising and planning the deed with precision. She appears to be absolutely secure in her belief in her husband's claim to the throne and her own position at his side as queen. So she supports him and, when he can do no more, she herself gilds the faces of the grooms with blood. ...read more.

The evil deeds committed by Macbeth far outweigh any true feelings if sympathy we might have for the man. So at the end of the play Malcolm speaks of Macbeth as a "dead butcher".. The way in which the playwright presents the character, allowing us to share in his most intimate thoughts, certainly encourages pity. Also, Shakespeare gives Macbeth some of the most stirring poetry to speak so that his words and the skilful images he uses move us. But then Macbeth is a tyrant, a vicious and thoughtless killer who allows nothing to stand in his way. Perhaps the tragedy is that we see the decline of a man who had so much in his favour: he has all the potential for success. It is not his death that moves us then but rather the realisation that here we see a man who has given in to his inherent weakness. As traitor, tyrant and murderer he deserves to be punished by death. Yet we cannot help but feel a sense of loss that comes with the destruction of a great man. Before judging too harshly, look again at how the man struggles with life and the choice he has to make in the great soliloquies Shakespeare gives this character to speak: This play is a tragedy because of all the pointless killings that take place in the story of Macbeth. Duncan was an innocent man who was killed because of Macbeth's greediness to become king. Banquo was another innocent man who was murdered because of Macbeth's fear of what might happen to him if Banquo told everyone who really killed Duncan. Lady Macduff and her son were two very insignificant characters in the play and did not deserve to die because they were not at fault. The killings that take place in the play, with a doubt, were entirely unnecessary. Therefore making Macbeth a tragedy. ...read more.

During the course of the play Shakespeare shows us the breakdown of what might have been a sound and fulfilled marriage - yet another price Macbeth has to pay for his "vaulting ambition". There seems to be strong evidence of the latter option, in terms of the themes of the play and Shakespeare's 'message': that there is a price to pay for evil. We do see that once Macbeth is on his way, there is no 'cure'. He goes on with a determination and resolve that knows no bounds. Although he frequently questions his own behaviour, he does nothing about changing. Instead, he goes back to the witches - and this time there is no doubt he makes the choice to consult them. Macbeth puts his belief in what he hears from the witches and in this he has the backing of his wife. The witches, who speak in the passive voice, do not give instructions or tell Macbeth what to do. Instead, they tell him what he will be. Although he hesitates initially, he is quick to take action, making plans for the future so that the witches' words can become reality. The audience is aware that, in the end, the equivocal nature of the witches' predictions must lead to his downfall. It is suggested that Lady Macbeth takes her own life and is thus beyond the bounds of Christian redemption and salvation. Shakespeare seems to imply that once we are committed to following a path of evil, it is very difficult to break away - even though there is always the chance of redemption. Macbeth chooses never to consider the alternative. Once he has made the decision to put into action the witches' predictions he follows the path he has chosen with a b****y determination. In Act 3 he claims, "I am in blood / Stepp'd so far, that, should I wade no more / Returning were as tedious as go o'er." ...read more.