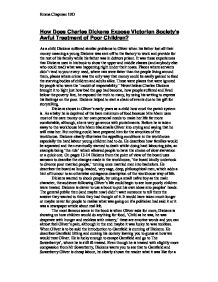 How Does Charles Dickens Expose Victorian Society's Awful Treatment of Poor Children? As a child Dickens suffered similar problems to Oliver when his father lost all their money meaning a young Dickens was sent off to the factory to work and provide for the rest of his family while his father was in debtors prison. It was these experiences that Dickens uses in his book to show the upper and middle classes (and anybody else who could read) what was happening right under their noses. Places where servants didn't tend to your every need, where rats were fatter than the people living around them, places where crime was the only way that money could be easily gained to feed the starving bodies of children and adults alike. These were places that were ignored by people who were the 'model of respectability.' Nevertheless Charles Dickens brought it to light just how bad the gap had become, how people suffered and lived below the poverty line, he exposed the truth to many, by using his writing to express his feelings on the poor. Dickens helped to start a chain of events due to his gift for storytelling. Dickens shows in Oliver's early years as a child how cruel the parish system is. As a baby he is deprived of the bare minimum of food because Mrs Mann uses most of the care money on her own personal needs to make her life far more comfortable, although, she is very generous with punishments. ...read more.

The opening remarks for chapter 6 are highly ironic as he tells us how mourners at the funeral of an elderly wealthy relative are able to overcome their grief, when in fact they actually stand to inherit a lot of money. It is quite a contrast, how there is a lot of grief for the loss of a loved one of a poor family to a relative of a rich family. Dickens used this to give people of wealthier upbringings a better understanding of the rapidly growing gap between the rich and poor. When Oliver leaves the Sowerberrys' heading for London, he goes to the Workhouse, where he sees his old friend Dick-who was also brought up at Mrs Mann's house-who is weeding the garden, even though he was very ill. This scene has great pathos in it especially when Dick, who is himself dying, blesses Oliver. It is one of the more captivating moments in the book, where Oliver and Dick share an embrace, Dickens' description of this moment is so heart warming it brings you close to tears, you want the two of the end up having the happily ever after that they deserve. Dickens wanted us to see that so called criminals that were dying from the neglect of the parish and the authorities were not criminals but innocent children. ...read more.

There are lessons to be learnt such as the fact that good can triumph over evil. Dickens once said that 'I wished to show in little Oliver, the principle of good surviving through every adverse circumstance, and triumphing at last.' Charles Dickens was interested in bringing about change, and he used Oliver's experience to help that. From Oliver's birth to the Workhouse to his times in London, Dickens exposes cruel treatment to children with his witty comments; shocking descriptions, matter of fact tones, and his ironic remarks. He makes light of a terrible situation making it comical but the facts are still there and they do still have effect. Although it ends on quite a positive note with Oliver being rescued and returned to his family and those who exploited him all receive severe punishment. Dickens was careful not to lure the reader into a fantasy as it turns out they were too late to save his friend Dick and Nancy who was brutally murdered. He finishes the book on a strong message, that out of evil can come good but it isn't completely perfect, he makes sure it is no fairytale ending. Overall Charles Dickens uses the story of 'Oliver Twist' to expose the awful treatment of Victorian children in a way that no other author could thus helping to bring about the changes that he and so many others campaigned for. Emma Chapman 10D ...read more.