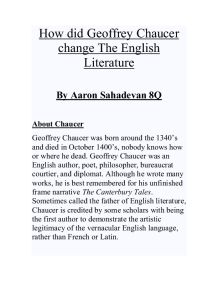 How did Geoffrey Chaucer change the English Literature?

How did Geoffrey Chaucer change The English Literature By Aaron Sahadevan 8Q About Chaucer Geoffrey Chaucer was born around the 1340's and died in October 1400's, nobody knows how or where he dead. Geoffrey Chaucer was an English author, poet, philosopher, bureaucrat courtier, and diplomat. Although he wrote many works, he is best remembered for his unfinished frame narrative The Canterbury Tales. Sometimes called the father of English literature, Chaucer is credited by some scholars with being the first author to demonstrate the artistic legitimacy of the vernacular English language, rather than French or Latin. Interesting facts about him This is some of Geoffrey Chaucer most famous works during is entire life: Major works * Translation of Roman de la Rose, possibly extant as The Romaunt of ...read more.

The poem is also written in Middle English. What he did to the English Literature This is the sort of Translation for the language: Line Original(Chaucer's Style) Translation (Standard English) This frere bosteth that he knoweth helle, This friar boasts that he knows hell, And God it woot, that it is litel wonder; And God knows that it is little wonder; Freres and feendes been but lyte asonder. Friars and fiends are seldom far apart. For, pardee, ye han ofte tyme herd telle For, by God, you have of times heard tell How that a frere ravyshed was to helle How a ravished friar went to hell In spirit ones by a visioun; In spirit, once by a vision; And as an angel ladde hym up and doun, ...read more.

That none of them come to this place?" Yis, quod this aungel, many a millioun! "Yes," answered the angel, "many a million!" And unto sathanas he ladde hym doun. And the angel led him down to Satan. After his death Chaucer died somewhere near the 1400, as it comes from the engraving on his tomb, which was built more than one-hundred years after Chaucer's death. There is some fanciful speculation-most recently in Terry Jones' book Who Murdered Chaucer?: a Medieval Mystery-that he was murdered by enemies of Richard II or even on the orders of his successor Henry IV. But Chaucer's teachings aren't forgotten, his teachings move on to the next centuries and the language gradually increased; until it created our language. ...read more.