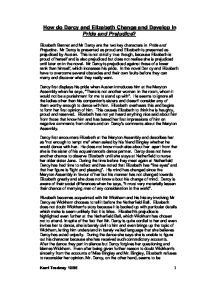 How do Darcy and Elizabeth Change and Develop in Pride and Prejudice?

How do Darcy and Elizabeth Change and Develop in Pride and Prejudice? Elizabeth Bennet and Mr Darcy are the two key characters in Pride and Prejudice. Mr Darcy is presented as proud and Elizabeth is presented as prejudiced by Austen. This is not strictly true though, because Elizabeth is proud of herself and is also prejudiced but does not realise she is prejudiced until later on in the novel. Mr Darcy is prejudiced against those of a lower rank than himself, which increases his pride. In the novel Darcy and Elizabeth have to overcome several obstacles and their own faults before they can marry and discover what they really want. Darcy first displays his pride when Austen introduces him at the Meryton Assembly when he says, "There is not another woman in the room, whom it would not be a punishment for me to stand up with". He seems to ignore all the ladies other than his companion's sisters and doesn't consider any of them worthy enough to dance with him. Elizabeth overhears this and begins to form her first opinion of him. This causes Elizabeth to think he is haughty, proud and reserved. ...read more.

For the entire evening, Lady Catherine does nothing but remind her guests of their inferior rank. After dinner she speaks about her "opinion on every subject in so decisive a manner as proved that she was not used to have her judgment controverted." Her means of giving advice is nothing short of despotic, and her impertinent questioning of Elizabeth reveals an utter lack of respect for the Bennet family. A short time after the start of Elizabeth's stay at Hunsford Darcy and Colonel Fitzwilliam arrive at Rosings. When they meet for dinner Mr. Darcy looks ashamed at his aunt's impertinence and ill breeding in treating Elizabeth as an inferior. At Rosings Austen uses dramatic irony to make it increasingly clear that Darcy is falling in love with Elizabeth and that Elizabeth has no suspicions whatsoever that this is happening. When Elizabeth is at Hunsford alone, Mr Darcy calls and proposes. This is a prime example of Austen's abilities to bring the characters to life and reveal their personalities through dialogue. Elizabeth's lively character and her disregard for considerations of rank show through clearly in her reaction to Darcy's proposal. Her pride is also evident, for the lack of civility in her refusal is due primarily to injured pride resulting from Darcy's frank explanation of his reservations about proposing to her because of her inferior connections. ...read more.

It is at this time, when she hears that Lydia and Wickham are to be married that she realises that Darcy is the man that would most suit her: "he was exactly the man, who in disposition and talents, would most suit her. His understanding and temperament, though unlike her own, would have answered all her wishes". It is from Lydia's conversation that Elizabeth learns that Darcy was present at the wedding and learns that Darcy had a major part in making Wickham marry Lydia. Mr Bingley and Darcy return to Netherfield soon after Lydia and Wickham have left for the north and Elizabeth begins to hope that Darcy's feelings for her have not changed and Elizabeth is mortified by her mother's cold reception of Darcy considering what he has done for Lydia showing her further embarrassment of her mother. Darcy's accompanying Bingley to Netherfield seems to have no other object but a chance to renew his offer of marriage to Elizabeth. Elizabeth's prejudice has been slowly removed by her reflection on Darcy's letter, and Darcy's treatment of Elizabeth and the Gardiners demonstrates that his pride has been considerably abated as well. All that remains is for the two of them to become aware of each other's changes in attitude and mutual regard for one another. Kerri Tredway 10B5 1 ...read more.