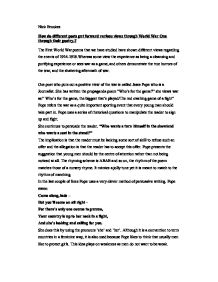 Nick Brookes How do different poets put forward various views through World War One through their poetry.? The First World War poems that we have studied have shown different views regarding the events of 1914-1918.Whereas some view the experience as being a cleansing and purifying experience or sees war as a game, and others demonstrate the true horrors of the war, and the shattering aftermath of war. One poet who puts out a positive view of the war is called Jesse Pope who is a Journalist. She has written the propaganda poem "Who's for the game?" she views war as:" Who's for the game, the biggest that's played/The red crashing game of a fight" Pope refers the war as a quite important sporting event that every young man should take part in. Pope uses a series of rhetorical questions to manipulate the reader to sign up and fight. She continues to persuade the reader; "Who wants a turn himself in the show/and who wants a seat in the stand?" The implication is that the reader must be lacking some sort of skill to refuse such an offer and the allegation is that the reader has to accept this offer. Pope presents the suggestion that young men should be the centre of attention rather than not being noticed at all. ...read more.

The poem ties it all together in the last few lines. In Latin, the phrase "Dulce et decorum est pro partria mori" means: "It is sweet and becoming to die for one's country." Owen calls this a lie by using good delivery, vivid comparisons, and graphic images to have the reader feel disgusted at what war is capable of. Peace was written by Rupert Brooke, after an emotional crisis just before the war and his confusion of sexuality and love he seeked a fresh start. This was provided by the war. The first theme is of spiritual cleansing: "Now, God be thanked Who has matched us with His hour, And caught our youth, and wakened us from sleeping, With hand made sure, clear eye, and sharpened power, To turn, as swimmers into cleanness leaping," The first theme is of spiritual cleansing: Brooke sees the war as a way of giving man moral purpose and therefore cleanse him The image of "swimmers into cleaness leaping" gives the idea of man washing away his past in life and starting a new one. The way Brooke says "youth, and wakened us from sleeping" indicates that the youth have not been doing anything and they should be joining the action. The quote: Glad from a world grown old and cold and weary/Leave the sick hearts that honour could not move,/And half-men, and their ...read more.

When Owen says "And girls glanced lovelier as the air grew dim" means that nobody cares about him, but they reveal pity to look like a nice person yet it makes the other person feel pathetic. Owen asks "Girls' waists are, or how warm their subtle hands. /All of them touch him like some q***r disease" This is quite a depressing quote as he will never be able to love again, as he does not feel like a real man, this quote relates to line 42-3 "Tonight he noticed how the women's eyes /Passed from him to the strong men that were whole". I think that the last two lines sums it up: "How cold and late it is! Why don't they come And put him into bed? Why don't they come?" The quote shows that he is waiting for someone. It is quite dark as he is waiting for death , The way he repeats "Why don't they come" makes it look like he is pleading for somebody to come to take him away. The Different World War One poems that we have studied have shown different views because some poems like "Who's For The Game" were propaganda poems, to encourage conscription. Yet others Like Siegfried Sassoon and Wilfred Owen were actually soldiers in the war, and they want to reveal the truth and to show the people what actually happened. ...read more.