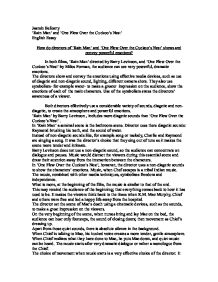 How do directors of 'Rain Man' and 'One Flew Over the Cuckoo's Nest' shows and convey powerful emotions? In both films, 'Rain Man' directed by Barry Levinson, and

Warm light creates a more tender atmosphere. However the bathroom is light, a mirror on the wall is obscured, which is an indication that Charlie cannot see Raymond as clearly as he should; it may suggest that although they are brothers, Charlie does not really know or understands Raymond as they spent such a long time away from each other. In 'One Flew Over the Cuckoo's Nest' main scene, the scene of Mac's death, lights are off. The audience can see only faces or a white pillow when Chief is strangling Mac. Only their faces are lit up; everything else is in darkness. Only a little bit of light comes from the corridor. This creates a more dramatic atmosphere, tension, makes the audience concentrate on Chief's emotions and shows that Mac is unable to make any sound or move. However, when Chief moves towards the window it's getting lighter; finally when he breaks the window and is free, in day-light the viewers can see the difference between inside and outside of the hospital. The audience can notice this through the whole film; it's always darker inside the hospital, and when Mac and the others go out, like for example when they go fishing, the lighting is much brighter. This may suggest that the patients were not allowed to have as much day-light as they'd have at liberty. ...read more.

Another symbol used by Levinson in the bathroom scene is a mirror. The mirror makes the audience think back; it reflects the past, and as the viewers see Charlie in the mirror it reminds the audience about Raymond's past. Symbolism of water was also used on 'One Flew Over the Cuckoo's Nest'. When Chief lifts water faucet and uses it to break a window, there is a lot of water on the floor and it's flowing out of the pipes. The audience can see the flowing water which may remind them again about re-birth and the beginning of a new life; in 'One Flew Over the Cuckoo's Nest' it is Chiefs re-birth as he escapes from hospital and starts a new life free again. All the media techniques used by the directors make a great impression on the audience. Watching 'Rain Man' the audience feel sorry for Raymond, when they see his disability, how Charlie has to help him with very simple activities. The audience feel even greater sympathy as Raymond makes them laugh or when Charlie yells at him. After watching 'One Flew Over the Cuckoo's Nest' and Mac's death, the audience can be shocked. But as Forman used the cinematic devices such as lighting and non-diagetic sound to show how miserable Mac's life would be if Chief had not killed him, the audience can also feel sympathy for Chief and viewers may feel happy as he has escaped. ?? ?? ?? ?? ...read more.