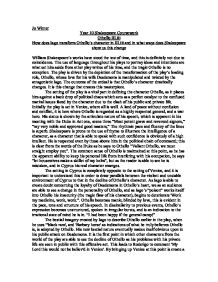 How Do Iago's soliloquies set the play up for act 3 scene 3?

Jo Winter Year 10 Shakespeare Coursework Othello III.iii How does Iago transform Othello's character in III.iii and in what ways does Shakespeare show us this change William Shakespeare's works have stood the test of time, and this is definitely not due to coincidence. The use of language throughout his plays to portray ideas and intentions are what set him aside from other play writes of his time, and the tragic Othello is no exception. The play is driven by the depiction of the transformation of the play's leading role, Othello, whose love for his wife Desdemona is manipulated and twisted by the antagonistic Iago. The outcome of the ordeal is that Othello's character drastically changes. It is this change that creates this masterpiece. The setting of the play is a vital part in defining the character Othello, as it places him against a back drop of political chaos which acts as a perfect catalyst to the confused marital issues faced by the character due to the clash of his public and private life. ...read more.

The common sense of Othello is maintained at this point, as he has the apparent ability to keep his personal life from interfering with his occupation, he says "let housewives make a skillet of my helm", but as the reader is able to see he is mistaken, and in Cyprus his real character emerges. The setting in Cyprus is completely opposite to the setting of Venice, and it is important to understand this in order to draw parallels between the violent and unstable environment of Cyprus to that in the decline of Othello's character. As Iago is able to create doubt concerning the loyalty of Desdemona in Othello's heart, we as an audience are able to see a change in the personality of Othello, and as Iago's "poison" works itself into Othello his insecurity (the tragic flaw of his character), begins to deteriorate 'Work my medicine, work, work.". ...read more.

By bringing up Venice at this point is create a contrast, as the audience is able to visualize the honorable respected Venetian Othello in direct comparison to the savage like acts of Othello. This emphasized the anarchy of Cypress. At this point Othello has become manipulated by Iago to the extent that they are beginning to switch roles. The surprise in Rodrigo's comment also shows the obvious change in Othello. Othello's fall to madness is seen through his inability to separate private feelings and public duties, and through setting, Shakespeare signals the changes which occur in Othello's character and make it consistent with his surrounding transformations. The description of Cyprus and Venice is significant, and shows the transformation of Othello's character. It also shows the transformation if Iago as in Venice Iago is insignificant but once in Cyprus he works his way up the hierarchy to being the next in line to Othello's role. The most important signal which is used by Shakespeare is Iago without him the play would have no backbone and would make no sense... ...read more.

This essay only addresses the question at times, not focussing enough on Iago. His soliloquies are not explicitly mentioned once in this essay, which is a great shame as they are a great dramatic technique used by Shakespeare. It is ...

This essay only addresses the question at times, not focussing enough on Iago. His soliloquies are not explicitly mentioned once in this essay, which is a great shame as they are a great dramatic technique used by Shakespeare. It is clear by the introduction that this essay will lose focus.

The analysis in this essay is sound, but there are plenty of places where improvements could be made. When the essay stays on focus, the analysis is good, with embedded quotes allowing close analysis of language and imagery. However, the introduction is appalling. It has no relevance to the question, talking about Shakespeare's skilful construction. If you're going to have a wishy-washy bit where you praise Shakespeare, this is best done in the conclusion where you have some evidence to back up and weave into the question. Similarly, the second paragraph isn't pertaining to the task set at all. If I were answering this question, I would've looked closely at Othello's language changing, and in particular his soliloquy near the end of the play. Unfortunately, this essay focuses too much on setting, a seemingly irrelevant point in this discussion. It is key not to get bogged down with one idea! I would've liked to have seen some reference to Shakespeare's construction throughout the analysis, and a bit more awareness of dramatic effect on stage. The acknowledgement of audience response is good.

This essay has a clear structure, but each paragraph begins off poorly. It is vital that each paragraph is clearly signposted with a concise sentence summarising the point being made. This essay tends to talk about something completely irrelevant in the first sentence. Spelling, punctuation and grammar are used well. I do however, have a query with the ending. This isn't a piece of creative writing, and ending with an ellipsis is highly inappropriate. The last point is not explained, whereas if it was it would add to the essay's analysis.