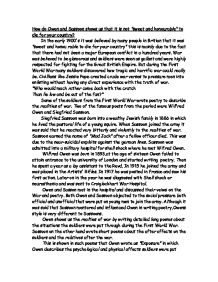 How do Owen and Sassoon shows us that it is not &quot;sweet and honourable&quot; to die for your country?

How do Owen and Sassoon shows us that it is not "sweet and honourable" to die for your country? In the early 1900's it was believed by many people in Britian that it was "sweet and honou rable to die for your country" this is mainly due to the fact that there had not been a major European conflict in a hundred years. War was believed to be glamorous and soldiers were seen as gallant and were highly respected for fighting for the Great British Empire. But during the First World War many soldiers discovered how tragic and horrific war could really be. Civillians like Jessie Pope created crude war verses to pressure men into enlisting without having any direct experience with the truth of war. "Who would much rather come back with the crutch Than lie low and be out of the fun?" Some of the soldiers from the First World War wrote poetry to describe the realities of war. Two of the famous poets from the period were Wilfred Owen and Siegfried Sassoon. Siegfried Sassoon was born into a wealthy Jewish family in 1886 in which he lived the pastoral life of a young squire. When Sassoon joined the army it was said that he reacted very bitterly and violently to the realities of war. Sassoon earned the name of "Mad Jack" after a fellow officer died. This was due to the near-suicidal exploits against the german lines. Sassoon was admitted into a military hospital for shell shock where he met Wifred Owen. Wilfred Owen was born in 1893,at the age of sixteen Owen failed to attain entrance to the university of London and started writing poetry. ...read more.

Then he attacks you with "You smug-faced crowds with kindeling eye" . Then he ends this stanza in saddness which I think works very well due to the contrast with the rest of the poem "Sneak home and pray you'll never know The h**l where youth and laughter go." In this last stanza Sassoon is expressing his anger mainly towards the people back in Britian who pressure the soldiers into going to warfare without having any idea of the realities of war. "Dulce et Decorum est" was written by Owen and Sassoon in this poem they express there anger towards Jessie Pope. In which they contradict our normal veiw of soldiers marching proudly and having immaculate uniforms within the first stanza "Bent double like beggars under sacks" and "Many had lost their boots ,but limped on,blood shood." Which automatically shocks you,it is not what you expect and mocks the glamourised picture of war. In the second stanza the alarm and panic of the gas attack is captured by the repitition of the word gas, the use of the exclamation marks "GAS! GAS! Quick Boys!". Then they use clumsy words like "found'ring" which they combine with words like "drowning" and "yelling" which work well together to give us a good veiw of what gas attacks were like. They also use a few compaisions to present the horror of a gas attack. "And flound'ring like a man in fire or lime . . ."and "As under a sea, I saw him drowning.". These comparisions are similies which you do not think of using when talking about war. The last stanza describes the dead bodies and how they fling the man who died in the gas attack onto the wagon as well. ...read more.

In this poem the mother is told what she wants to hear, that her son died for his country and was very brave "We mothers are so proud of our dead soldiers". This shows use the point of veiw of the mothers in the early 1900's that they found it more bearable if their sons died for their country. In the first stanza the Brother officer gives the mother a letter saying that her son is dead. Throughout this stanza Sassoon uses soft language which is almost patriotic"Had she shone with gentle triumph, brimmed with joy" it is a big contrast with the second part of the poem which uses very harsh language "cold footed heartless swine ," . As the brother walks out of the mother's house Owen explains how the brother officer felt about his visit "He'd told the old dear some gallant lies" the brother officer felt he had done the right thing, he didn't feel bad that he had lied and he felt that he had protected the mother from the truth. Then in the next stanza Owen explains what the brother officer really thought about Jack (the dead soldier) "cold-footed useless swine, Had panicked...." this shows us that the brother officer hated Jack, thought he was a useless soldier and that Jack put other soldiers lives at risk. The title of the poem could be from the point of veiw of the mother seeing him as " The Hero" or from the sarcastic point of veiw of the brother officer. Owens long poems about the horrifying situations the soldiers were put through combined with Sassoons short sarcastic poems about peoples reaction to the soldiers after the war gives us a very clear picture of the realities of war and why it is not sweet and honourable to die for your country. ...read more.