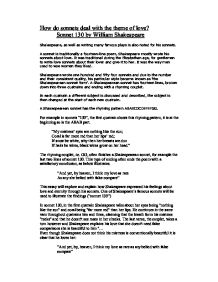 How do sonnets deal with the theme of love?

How do sonnets deal with the theme of love? Sonnet 130 by William Shakespeare Shakespeare, as well as writing many famous plays is also noted for his sonnets. A sonnet is traditionally a fourteen-line poem, Shakespeare mostly wrote his sonnets about love. It was traditional during the Elizabethan age, for gentlemen to write love sonnets about their lover and give it to her. It was the way men used to woe women they liked. Shakespeare wrote one hundred and fifty four sonnets and due to the number and their consistent quality, his particular style became known as 'the Shakespearean sonnet form'. A Shakespearean sonnet has fourteen lines, broken down into three quatrains and ending with a rhyming couplet. ...read more.

"And yet, by heaven, I think my love as rare As any she belied with false compare" This essay will explore and explain how Shakespeare expressed his feelings about love and eternity through his sonnets. One of Shakespeare's famous sonnets will be used to illustrate the findings ("sonnet 130") In sonnet 130, in the first quatrain Shakespeare talks about her eyes being "nothing like the sun" and coral being "far more red" than her lips. He continues in the same vain throughout quatrains two and three, claiming that the breath form his mistress "reeks" and that he doesn't see roses in her cheeks. The last verse, the couplet, takes a turn however and Shakespeare explains his love that she doesn't need false comparisons she is beautiful to him "... ...read more.

He changes the traditional love sonnet, into a sonnet, which does not exaggerate. Finally Shakespeare uses the last couplet to change the sonnet around and explain the poem whereas in sonnet 18 for an example he just sums up what he has been saying and draws the sonnet to an end. In my opinion despite the fact that Shakespeare is saying that his "mistress" is nothing like the things he compares her to but his love is "rare", I would not appreciate if it was my lover writing this particular sonnet about me because it would be nice to know that my lover at least thinks there is one thing beautiful about me that attracted me to him. ...read more.