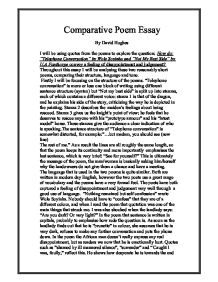 How do: &quot;Telephone Conversation&quot; by Wole Soyinka and &quot;Not My Best Side&quot; by U.A Fanthorpeconvey a feeling of disappointment and judgement?

Comparative Poem Essay By David Hughes I will be using quotes from the poems to explore the question: How do: "Telephone Conversation" by Wole Soyinka and "Not My Best Side" by U.A Fanthorpe convey a feeling of disappointment and judgement? Throughout this essay I will be analysing these two reasonably short poems, comparing their structure, language and tone. Firstly I will be focusing on the structure of the poems. "Telephone conversation" is more or less one block of writing using different sentence structure (syntax) but "Not my best side" is split up into stanzas, each of which contains a different voice: stanza 1 is that of the dragon, and he explains his side of the story, criticising the way he is depicted in the painting. Stanza 2 describes the maiden's feelings about being rescued. Stanza 3 gives us the knight's point of view; he feels that he deserves to rescue anyone with his "prototype armour" and his "latest model" horse. ...read more.

He shows how desperate he is towards the end of the poem. He starts to describe some his body parts that aren't black:" Palm of my hand, soles of my feet, are a peroxide blonde." "-One moment madam! - Sensing her receiver on the thunderclap." These quotes show how inconsolable he is, all this trouble just because of the colour of his skin. This also shows how absurd the question is, and we as the audience find it humorous, but when we are laughing, we are laughing at the landlady's ignorance. In the poem "Not my best side" (which is based on the painting of George and the dragon) the disappointment isn't on such a harsh scale. The things that the characters are complaining about are almost childish: "The artist didn't give me a chance to pose properly," complains the dragon. This seems very childish compared the difficulties that the man in "Telephone conversation" has to face. The dragon also complains about the state of his "conqueror". ...read more.

"Telephone conversation" is a lot more serious due to the fact that it's more personal and he can't hide the fact that he is of different colour. As I have already said the tone/mood of "Not my best side" is a lot more humorous and childish due to the small insignificant things that the characters are arguing about, although they too have a serious point to make. I find " telephone conversation" so absorbing that it strangely makes me want to know more. Does the man find somewhere to stay? Is he mistreated again due to his race? During the poem I feel a lot more for him than any of the characters out of "Not my best side", which I must say was more entertaining to read and I would also like to see how things turned out. After studying these two poems I have decided that there are many ways in which they portray a feeling of disappointment and judgement, mainly through a good use of the English language which establishes a great sense of the troubles that each of the characters are going through, and also the troubles that society may put individuals through. By David Hughes ...read more.