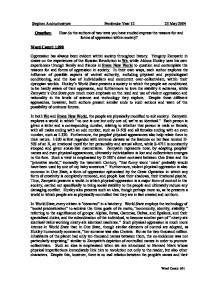 How do the authors of two texts you have studied express the reasons for and forms of oppression within society?

Stephen Andruchowycz Pembroke Year 12 23 May 2004 Question: How do the authors of two texts you have studied express the reasons for and forms of oppression within society? Word Count: 1,998 Oppression has always been evident within society throughout history. Yevgeny Zamyatin in draws on the experiences of the Russian Revolution in We, while Aldous Huxley uses his own experiences through family and friends in Brave New World to question and contemplate the reasons for and forms of oppression in society. In their own ways, each author explores the influence of possible aspects of central authority, including physical and psychological conditioning, and the loss of individualism and concurrent over-collectivism, within their dystopian worlds. Huxley's World State presents a society in which the people are conditioned to be hardly aware of their oppression, and furthermore to love the stability it achieves, while Zamyatin's One State puts much more emphasis on the need and use of violent oppression and rationality in the levels of science and technology they explore. Despite these different approaches, however, both authors present similar ends to such actions and warn of the possibility of ominous futures. ...read more.

Furthermore, when O-90 refuses to accept help from D-503, his feelings of guilt are unknown to him, and cannot be expressed as anything other than the motif of, "?-1," the representation of all things irrational in society. Indeed, the whole psychological system is based around forms of rational maths and science, with logic being the controlling device for all actions in existence. Similarly, nature, and the emotions it can provide have also been eliminated by One State. The Green Wall separates the technological world not only from the environment, but also from the Mephi, the underground subverters of the regime. "We isolated our perfect machine world from the irrational ugly world of trees, birds, and animals." Of course, the effectiveness of such an action is questionable as the "sweet tasting" pollen continuously seeps over the wall, and, perhaps more importantly, the birds are in constant vision trying to penetrate the invisible barrier, a metaphor for the "wild freedom," that represents the Mephi. The people are generally content with life and are forced into a stage where such oppression is not only accepted, but also craved. ...read more.

Furthermore, the fact that "science is dangerous, we have to keep it most carefully chained," emphasises the need to control it, as indeed it is with Mustapha Mond being personally responsible for overseeing any production or publication of works and the eradication of those which may stimulate rebellious thoughts. Through this form of oppression in both novels, the dangerous and uncontrollable nature of science unguided by ethics is presented, a view not really expressed by Zamyatin. Both Brave New World and We express slightly different forms and reasons for oppression in society though present similar ends. The authors warn of a society in which the individual is lost to the collective, and, more worrisome, where people may not fight their oppression, but embrace it. Brave New World suggests that to be on guard against the threat, society must be wary of the oppression of pleasure, in which ecstasy allows adult society to descend to deep immaturity. We suggests that ideology must not allow society to objectify nature and deny morality and humanity. The overriding effect of oppression in both the World State and the One State is the loss of individuality; the essence of individualism is a problem to the power structures of both societies. ...read more.