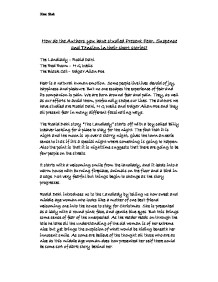 How do the Authors you have studied Present Fear, Suspense and Tension in their short stories?

How do the Authors you have studied Present Fear, Suspense and Tension in their short stories? The Landlady - Roald Dahl The Red Room - H G Wells The Black Cat - Edgar Allan Poe Fear is a natural human emotion. Some people live lives devoid of joy, happiness and pleasure. But no one escapes the experience of fear and its companion is pain. We are born around fear and pain. They, as well as our efforts to avoid them, profoundly shape our lives. The authors we have studied are Roald Dahl, H G Wells and Edgar Allan Poe and they all present fear in many different fascinating ways. ...read more.

Roald Dahl introduces us to the Landlady by telling us how sweet and middle age woman who looks like a mother of one best friend welcoming one into the house to stay for Christmas. She is presented as a lady with a round pink face, and gentle blue eyes. But this brings some sense of fear of the unexpected. As the reader reads on through the tale he take all the understanding of the old woman is of her extreme nice but yet brings the suspicion of what would be hiding beneath her innocent smile. As some are believe of the thought all those who are as nice as this middle age woman does how presented her self there could be some sort of dark story behind her. ...read more.

When the old woman was saying this is the night of all night it began some tension because she kept on saying it so that the unnamed boy would not go to the red room because she was implying that this night is a anniversary of someone who's dead. There was still tension when the old woman said to the unnamed man you go alone so that she was trying to say that night was a bad night, the unnamed boy still wanted to go to the red room because he said "it is what I came for" the three custodians made the boy feel uncomfortable, because they were didn't want ?? ?? ?? ?? Hiten Shah ...read more.