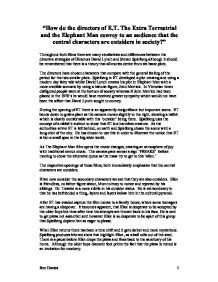 &quot;How do the directors of E.T. The Extra Terrestrial and the Elephant Man convey to an audience that the central characters are outsiders in society?&quot;

"How do the directors of E.T. The Extra Terrestrial and the Elephant Man convey to an audience that the central characters are outsiders in society?" Throughout both films there are many similarities and differences between the directive strategies of Directors David Lynch and Steven Spielberg although it should be remembered that there is a theory that all stories derive from six basic plots. The directors have chosen characters that compare with the general feeling of the period for the two similar plots. Spielberg in ET developed a plot creating and using a modern day fairy tale whilst David Lynch creates his plot in Elephant Man with a more credible scenario by using a historic figure, John Merrick. In Victorian times disfigured people were at the bottom of society whereas if John Merrick had been placed in the 1970's he would have received greater sympathy which would not have been the affect that David Lynch sought to convey. During the opening of ET there is an apparently insignificant but important scene. ET bends down to grab a plant as the camera moves slightly to the right, showing a rabbit which is clearly comfortable with this 'outsider' being there. Spielberg uses the concept of a rabbit's instinct to show that ET is a harmless creature. As the authorities arrive ET is left behind, on earth and Spielberg closes the scene with a long-shot of the city. He has chosen to use this in order to illustrate the notion that ET is but a small spec in the big wide world. As The Elephant Man film opens the music changes, creating an atmosphere of joy with traditional circus music. ...read more.

After a few more beers we see the alcoholic effect on Eliot as he walks into something before collapsing, drunk. ET picks up a comic and the camera zooms in on the words 'help.' As we return to Elliot's dissection class it appears that Eliot thinks that the live frog is saying help. The music builds up the excitement as Eliot begins to release these innocent creatures. These are ample examples from the scene by which you can see the link between these two outcasts. In Elephant Man, Mrs Kendal, a famous actress, comes to visit John. After a period the camera shifts to where John is building a Cathedral. This also bears significance as Cathedrals are related to intelligence, complexity and protection of all things which are paramount to John's story. Mrs Kendal presents John with a book; Romeo and Juliet. John begins to read "Romeo" whilst Mrs Kendal "Juliet" from the famous love scene. The music fades in, presenting the audience with the happiness for John but also the sadness that he is so feared and misunderstood. Perhaps Lynch chose the idea of using a theatrical person to emphasize that such a person would be able to ignore the grotesque outer layer of John's body. Lynch then starts to crush John's euphoria as he shows us that John is still an outcast. A hospital foreman sells tickets for people to see the Elephant Man. The camera shifts to John's room showing the "cloud nine" mood John was in before it suddenly bursts open. The circus music returns as the camera winds around the rabble to show John's disorientation. ...read more.

Steven Spielberg is your typical big budget, big movie, American director. He has created a modern fairy tale in order to cater for the popular Science Fiction culture of that time (Star Wars etc.) He has also chosen to make uses of large open spaces contrasting them with small cramped cupboards which are perhaps a correlation between the warmth of large scale friendship and the small cramped world of none. Spielberg also chose to make use of comical methods to illustrate his characters status as well as stunning visual effects, music and cinematography that he had the ability, the money and the colour to involve. Lynch on the other hand has had to make use of a very low budget causing him to shoot in monochrome (however this seems to emphasize the simplistic black and white rules by which these deformed figures were treated.) Lynch has also tended to use small spaces (rooms etc.) perhaps relating them to the small lonely world that John was subjected to endure. Have the Directors been successful? I think they have. It is not easy to come to such a blunt conclusion, as the directors have used many comparably different techniques to bring there characters across although taking many similar routes along the way. On personal preference I found The Elephant Man to be the more epic of the two. I felt the ending was magical as John Merrick chose to end his life upon the drug that euphoria creates rather than subject himself to the possibilities of the hurt he has already experienced. Barber's Adagio for Strings captures the atmosphere perfectly, possibly bringing the audience to tears 1 Ben Davies ...read more.