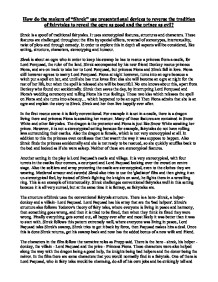 How do the makers of Shrek use presentational devices to reverse the tradition of fairytales to reveal the ogre as good and the prince as evil?

How do the makers of "Shrek" use presentational devices to reverse the tradition of fairytales to reveal the ogre as good and the prince as evil? Shrek is a spoof of traditional fairytales. It uses stereotypical features, structures and characters. These features are challenged throughout the film by special effects, reversal of stereotypes, intertexuality, twist of plots and through comedy. In order to explore this in depth all aspects will be considered, like setting, structure, characters, stereotyping and humour. Shrek is about an ogre who in order to keep his swamp he has to rescue a princess from a castle, for Lord Forquaad, the ruler of the land. Shrek accompanied by his new friend Donkey rescue princess Fiona, and are on track to take her to Lord Forquaad, but princess Fiona and Shrek fall in love. Fiona still however agrees to marry Lord Forquaad. Fiona at night however, turns into an ogre because a witch put a spell on her, and until she has true loves first kiss she will become an ogre at night for the rest of her life, but when the spell is released she will be beautiful. No one knows about this, apart from Donkey who found out accidentally. ...read more.

These characters were also helped along the way with the dragon being a good help, the knights being bad helpers and the donor being the mirror. In the film there are some characters that you would normally find in a fairytale. One of them is Lord Faquaad, who in fairy tales would be charming, do all of his own jobs and be strikingly tall and good looking. He in this Film however is not very charming, quite arrogant in some places, he got shrek and donkey to rescue Princess Fiona for him, is extremely small, and is not that incredibly good looking. Another character that you would normally find in a fairy tale would be a Princess. In shrek, the fairytale Princess is Princess Fiona. In any ordinary fairy tale, the princess would be beautiful, can sing, gets rescued conventionally, and would be extremely elegant. However in this film, yes Princess Fiona is beautiful, yes she can sing, but is some how not elegant. During the film, Fiona makes revolting noises, blows up insects to make balloons, cooks for Shrek and Donkey like a maid would, eats rats with Shrek, and even wins a fight with 7 men on her own! Fiona can sing beautifully like a stereotypical princess, but then she could not hit the high note, causing a poor innocent butterfly to explode, which is not very stereotypical at all. ...read more.

Most of the humour comes from challenging stereotypes and clever puns and jokes with words. The way that most of the characters are not stereotypical is humorous to the eye and to the brain, they are funny to look and the jokes made about the lack of stereotypes are funny also. A good example of this is where Robin Hood in the forest meets Princess Fiona. We all think that Fiona will be captured but no, Robin Hood and his merry men break out into dance, and perform a dance routine, which indeed is not very stereotypical. Then as we all think Princess Fiona will be captured, she starts to fight the men. This part of the scene uses intertexuality to be funny, where she parodies a scene out of The Matrix and also is humorous to us because it is not stereotypical. She then beats all of the men in her fight and walks off! The use of voices and words that especially Donkey uses throughout the film are humorous, in the way that we would not expect that from a fairytale. Shrek uses all the conventions that I have mentioned in this essay to challenge traditional fairytales. Through reversal of stereotypes, intertexuality and twist of plots. The main reason why I think Shrek challenged conventional fairy tales well is that it was humorous, as no fairytales are funny, which made shrek different, in a league of its own ...read more.