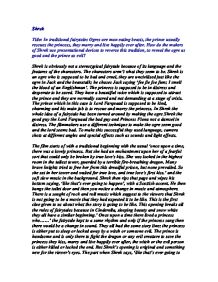 How do the makers of Shrek use presentational devices to reverse the tradition, to reveal the ogre as good and the prince as evil?

Shrek Title: In traditional fairytales Ogres are man eating beasts, the prince usually rescues the princess, they marry and live happily ever after. How do the makers of Shrek use presentational devices to reverse this tradition, to reveal the ogre as good and the prince as evil? Shrek is obviously not a stereotypical fairytale because of its language and the features of the characters. The characters aren't what they seem to be. Shrek is an ogre who is supposed to be bad and cruel, they are uncivilised just like the ogre in Jack and the beanstalk; he chases Jack saying 'fee fie foe fum; I smell the blood of an Englishman'. The princess is supposed to be in distress and desperate to be saved. They have a beautiful voice which is supposed to attract the prince and they are normally scared and not demanding at a stage of crisis. The prince which in this case is Lord Farquaad is supposed to be kind, charming and his main job is to rescue and marry the princess. In Shrek the whole idea of a fairytale has been turned around by making the ogre Shrek the good guy the Lord Farquaad the bad guy and Princess Fiona not a damsel in distress. The filmmakers use a different technique to make the ogre seem good and the lord seems bad. To make this successful they used language, camera shots at different angles and special effects such as sounds and light effects. The film starts of with a traditional beginning with the usual 'once upon a time, there was a lovely princess. But she had an enchantment upon her of a fearful sort that could only be broken by true love's kiss. She was locked in the highest room in the tallest tower, guarded by a terrible fire-breathing dragon. Many brave knights tried to free her from this dreadful prison, but none prevailed. ...read more.

Shrek on the other hand hates violence, instead of fighting he says, 'can't we not discuss this over a pint.' This is not the type of language you would expect from an ogre because love to fight they wait for opportunities like this and he is trying to back away from it. This shows that Shrek is not as violent as he looks he does not use his strength to start fights but he is decent and well- mannered. This shows that he is civilized, laid back and not at all aggressive. When they reach the castle Donkey refuses to walk over the bridge, but Shrek forces him to cross it by shaking it causing Donkey to cross without having any choice. When Donkey crosses it Shrek says, 'that'll do Donkey, that'll do.' This shows that Shrek has grown fond of this animal and he kind of likes him now. When Shrek breaks into the castle to rescue the princess, he does not act like normal rescuers. He is quick and aggressive he shakes her awake and tells her to hurry up. This is not a traditional way of waking a princess because it is normally romantic. He does not treat her royally or anything and when she tries to tell him about the way it's supposed to be he says, 'You've had a lot of time to plan this, haven't you?' Princess Fiona acts in a very demanding way, she is supposed to be a damsel in distress but her behavior is very assertive and insistent, she persist on him kissing her. In traditional fairytales the princess would never ask to be kissed. This shows us that she is a very self dependent character. She knows what she wants from life; she will fight for her way. Although Shrek seems violent we gather that he has not killed the dragon. When Princess Fiona tells him that he has to slay the dragon first he replies by saying, 'It's on my "to do" list. ...read more.

Donkey is talkative and lively; it is obvious to the viewer that he is to be a main character throughout the rest of the film. He wins over the audience strait away as he stands up to Shrek's unwelcoming attitude, and insists on staying with him. Shrek's relationship with the Donkey in the middle is more like a one day relationship but towards the end it is a friendly relationship. Although Shrek seems like a traditional ogre by the end of the film the viewers see him as a normal being that ends up having friends and a wife unlike normal ogres who end up getting killed. Although Lord Farquaad seems like a lord his actions, language and appearance suggests that he is the ogre or the villain of the story and that he is going to die with no happy future at all. He teases the ginger bread man, 'Run, run, run as fast as you can. You can't catch me, I'm the Gingerbread Man.' and the ginger bread man also end up saying to him, 'You're a monster!' which we get to know ourselves as the movie continues on. His appearance is quite different to what a lord is supposed to look like. Instead of being tall and charming he is extremely short and unattractive in a way. The story Shrek uses presentational devices o reverse the tradition so that by the end of the film we see the ogre as good the lord as evil and the princess as strong and independent. The moral of this movie or the message that Shrek is sending out is that no matter how ugly or hideous you look on the outside it's the inside that counts. In conclusion, the film brought to light that the rules of tradition are not always to be followed. Ogres will no longer be the expected 'bad-guy' and people will think twice about Princes with bad attitudes. This twist of fairytale will always be a unique and memorable production due to its clever humor and selection of illusory camera shots and cleverly presented ideas. ...read more.