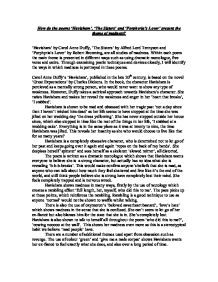 How do the poems 'Havisham', 'The Sisters' and 'Porphyria's Lover' present the theme of madness? 'Havisham' by Carol Anne Duffy, 'The Sisters' by Alfred Lord Tennyson and 'Porphyria's Lover' by Robert Browning, are all studies of madness. Within each poem the main theme is presented in different ways such as using dramatic monologue, free verse and satire. Through examining poetic techniques and devices closely, I will identify the ways in which madness is portrayed in these poems. Carol Anne Duffy's 'Havisham', published in the late 20th century, is based on the novel 'Great Expectations' by Charles Dickens. In the book, the character Havisham is percieved as a mentally strong person, who would never want to show any type of weakness. However, Duffy takes a satirical approach towards Havisham's character. She twists Havisham and makes her reveal the weakness and anger in her 'heart that breaks', 'I stabbed'. Havisham is shown to be mad and obsessed with her tragic past 'not a day since then I haven't wished him dead' as her life seems to have stopped at the time she was jilted on her wedding day 'the dress yellowing'. She has never stepped outside her house since, which also stopped in time like the rest of the things in her life, 'I stabbed at a wedding cake'. Everything is in the same place as it was at twenty to nine, the time Havisham was jilted. This reveals her insanity as she who would choose to live like that for so many years? Havisham is a completely obsessive character, who is determined not to let go of her past and keeps going over it again and again 'ropes on the back of my hands'. She despises herself 'spinster' and sees herself as a skeleton 'slewed mirror', all distorted. The poem is written as a dramatic monologue which shows that Havisham wants everyone to believe she is a strong character, but actually has no idea what she is revealing 'b-b-b-breaks'. ...read more.

'The Sisters' has a structured verses throughout the poem, which shows the Sister is very controlling, therefore has planned and knows exactly what she's doing. This again reveals the Sisters madness, because she is willing to do anything to reach her goal without any regret. The Sister reveals her madness in a variety of ways, but her insanity isn't that she has completely lost her mind, like Havisham, but the fact that she has evil characteristics ad thoughts. Even though she has always had feelings for the earl 'I loved his beauty passing well', she still wants him dead. However, before this line, the Sister reveals that she 'hated him with the hate of h**l'. This antithesis shows her confusion as although she loves him, on the other hand she hates him. This also shows how daunting the sister appears to be, as who would plan on killing someone they like, without any second thoughts or regrets? Although she has just committed a murder, the sister has no remorse for her actions, 'I curl'd and comb'd his comely head'. There is a big element of strong imagery here, with the use of alliteration, which places a disturbing picture of necrophilia in the readers mind. This action, of the Sister's, alone would make anyone believe that she is mad, as she is actually attracted to a dead body. She finds her revenge erotic and as she is comfortable around the dead earl, she reveals her satisfaction. Power, one of the additional themes used in the poem, is used many times throughout 'the Sisters'. The Sister is in power, or control, all throughout her revenge plan, which is firstly shown by the structured verses Tennyson has used. It also gives the impression to the reader that the Sister has planned every step of her revenge extremely carefully and thoughtfully. Also the simple rhyming pattern 'AABB', adds the control element to the poem, and again reinforces the insanity of the Sister, as the speakers control again shows tat she is aware of her actions, which, again, is quite daunting. ...read more.

The poem has a negative start, by the use of Browning's language, using words such as 'sullen', 'tore;, 'spite', 'worst', 'vex' and 'break'. According to the Lover, life without Porphyria is dull. However, the tone changes as well as the Lovers mood when Porphyria arrives, 'blazeup', 'war' and the use of the metaphor 'cheerless grate'. As well as warming up the rooms by lighting a fire, she also warms the Lover's mood up by her presence. By the use of all these and other clever techniques, especially enjambment, Browning has successfully achieved revealing the Lovers madness. The main theme of madness is presented in a variety of ways in all three poems that I have studied. The effective method consists of the use of enjambment, dramatic monologue and the effects of different style verse structures. Enjambment and dramatic monologue, used by Browning and Duffy, are, I believe, the most successful techniques to use when showing madness, as the enjambment creates the waffling effect - considered to be a characteristic in a 'mad' person - and the effect of dramatic monologue is another characteristic believed to be found in someone who are mentally disabled, as they tend to not realise how they appear to others. In all three poems 'Havisham', 'The Sisters' and 'Porphyria's Lover', the verse structures all have a different style; 'Havisham' is set out with paragraphs but the lines to do not end with proper punctuations, 'The Sisters' is set out so no reader would actually believe the poem would be about a mad women at a first glance, however, 'Porphyria's Lover' uses big enjambment and it is clear that the poem was not going to be about some one 'normal'. Using a few similar techniques and a few different to some extent, all three poems, in their own ways, portray madness, especially using the time that they were written in, which, I believe, was a big influence to their writing. Overall, I believe that all three poets should be congratulated on their poems as they show madness very effectively and successfully, using a number of techniques. By ...read more.