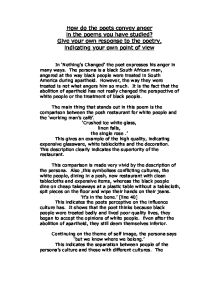 How do the poets convey anger

How do the poets convey anger in the poems you have studied? Give your own response to the poetry, indicating your own point of view In 'Nothing's Changed' the poet expresses his anger in many ways. The persona is a black South African man, angered at the way black people were treated in South America during apartheid. However, the way they were treated is not what angers him so much. It is the fact that the abolition of apartheid has not really changed the perspective of white people or the treatment of black people. The main thing that stands out in this poem is the comparison between the posh restaurant for white people and the 'working man's caf�'. 'Crushed ice white glass, linen falls, the single rose .' This gives an example of the high quality, indicating expensive glassware, white tablecloths and the decoration. This description clearly indicates the superiority of the restaurant. This comparison is made very vivid by the description of the persona. Also ,this symbolises conflicting cultures, the white people, dining in a posh, new restaurant with clean tablecloths and expensive items, whereas the black people dine on cheap takeaways at a plastic table without a tablecloth, spit pieces on the floor and wipe their hands on their jeans. 'it's in the bone.' ...read more.

This poem is his reply. The first stanza begins addressing the reader. Agard portrays his opinion by using sarcasm in the first three lines. He sees the person who offended him thinking that he is only half a person and it is this he takes offence to. It is not so much the cast but the opinion that he is less of a human being because of his parentage. 'Excuse me standing on one leg I'm half-caste' 'standing on one leg' is included to mock the person that insulted the persona by almost saying 'you think I'm half a person. You think that I stand on one leg'. Somebody has chosen to put the persona on the spot so he does the same back. He ridicules the offender by putting him on the spot by asking them a question they cannot answer and making fun of him because he is narrow minded. He mocks his offender by repeating the lines- 'Explain yuself Wha yu mean When yu say half-caste' This is followed all four times it is said by an example of how the offender is being stupid. He includes famous examples such as Picasso and Tchaikovsky and says if you mix black with white, you don't get a half-caste canvas or symphony in these cases. ...read more.

The third stanza is about the persona stating that she will not do her duties 'never say 'sir' or 'thank you ma'am, and I'll never curtsey more'. This is a very powerful line because of the repetition of never. The persona uses various methods of getting the reader to understand what she is feeling so the poem means more. The second half of stanza three and the whole of the last stanza is about Charlotte building up to say she is leaving. The anger increases as you read on. 'I've cleaned your plate, and I've cleaned your house, and I've cleaned the clothes you wore. But now your on your own my dear. I wont be there any more. And I'll eat when I please, and I'll sleep when I please, and you can open your own front door.' This is the final verse. The repetition of 'and' gives an impression of increasing anger and the repetition of 'I' shows that she is thinking about herself for once. The final line, 'and you can open your own front door.', is a good ending to the poem because it has already been included. The repetition makes the line stronger and more powerful every time you read it. The poet writes this so well, the reader feels the anger themselves because they can identify with the persona so well. All three poems use sarcasm and comparison very well so the reader begins to feel what the persona does ...read more.