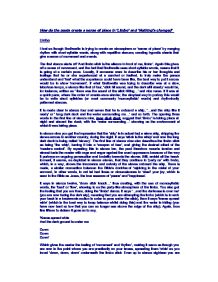 How do the poets create a sense of place in 'Limbo' and 'Nothing's changed'?

How do the poets create a sense of place in 'Limbo' and 'Nothing's changed' Limbo I feel as though Brathwaite is trying to create an atmosphere or 'sense of place' by merging rhythm with short-syllable words, along with repetitive stanzas, creating hypnotic chants that give a sense of movement and events. The first stanza starts off 'And limbo stick is the silence in front of me, limbo'. Again this gives off a sense of movement, and the fact that Brathwaite uses short syllable words, means that it is going at a certain pace. Usually, if someone were to describe his or her thoughts and feelings that he or she experienced at a carnival or festival, to truly make the person understand and 'feel' what the experience could have been like, the best way to put it across would be to show 'movement'. If what Brathwaite was trying to describe was at a slow, laborious tempo, a stanza like that of four, 'stick hit sound, and the dark still steady' would be, for instance, written as ' there was the sound of the stick hitting...' and vice versa. If it was at a quick pace, where the order of events were shorter, the simplest way to portray this would be to write short syllables (or most commonly 'monosyllabic' words) ...read more.

The first being the sun rising, out of the darkness which was limbo, and the second was also signifying the end for his moment of ecstasy; now was the time to bring it all to an end. 'Up Up Up And the music is saving me' This means that as he progressed upwards, his strength was from the music, the last thing that could give hope and help them not to think about the grim reality, which was slavery. The music was their 'savior', their 'light in the darkness'. Then there was the 'Hot Slow Step On the burning ground' The high tempo pace and lively spirit of the limbo had now come to a 'Hot slow step', with the heat signifying the intensity of their labor and the 'slow step' showing us the reluctance of the slaves. Though in Africa (which is where the slaves taken from) there would have been a tremendous amount of heat (which they of course were used to), there was the impression that the slaves had now reached foreign ground, as the heat of the ground was described as being 'burning', in other words, a heat they were not used to. Nothing's changed In this poem, Afrika approaches it with powerful, short syllable or sometimes-monosyllabic words and also with the use of repetition to show his feelings and outlook on District Six and the environment around him, similar to Brathwaite in 'Limbo'. ...read more.

'Eat it at a plastic table's top' instead of at a more prestigious oak table, laid with fresh table cloth, 'wipe your fingers on your jeans' in the place of the more hygienic napkin, 'spit a little on the floor' portraying a lower class image of a filthy and primitive lifestyle. 'It's in the bone' indicates, once again, a sour note of sarcasm and irony towards the fact that 'this is the way the blacks are (meant to be) born - it's in the bone'. By the comparison of the two places, of the 'dwelling place of the whites' and the 'dwelling place of the blacks', Afrika epitomizes the subtle and simplistic, stereotypical views of the Afrikaans (a name for the whites, who were originally the English people that claimed the land during the 1800's) who were therefore branding the blacks as being the 'common folk'. In this poem Afrika uses a 'sense of place' in order to create and portray thoughts and feelings, and to put across his primary message, which is that the separation of black and white people, in a way, remains, and the racist, patronizing views towards the black people suggest that ultimately: Nothing's changed. Having read both 'Nothing's changed' and 'Limbo', I have now come to the conclusion that both the poets (Tatamkhula Afrika and Edward Kamau Brathwaite), approach their poems in similar ways in the sense that both use a lot of repetition and short-syllable words to mount tension and to create the feeling of 'being in the moment'. ...read more.