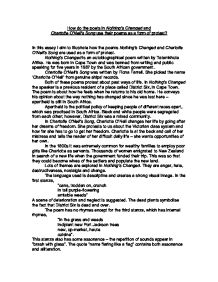 Nothing's Changed shocks the reader with the realisation that apartheid hasn't ended. Significant cultural differences are shown in stanzas five and six, between the white suburban living-style restaurant and the working man's caf� down the road which sells bunny chows. The restaurant flaunts its crisp white linen and roses whilst people eating at the caf� spit on the floor after sitting at plastic tables. This caf� is an appropriate illustration of District Six in the present, but it is also relevant to the past and how District Six was then. Any ordinary working-class person would have eaten at the caf�, and this stanza conveys to us a very accurate image of what it was like to live in District Six. In the poem, everything has changed physically but there is still no social change and the barrier between black and white people still remains, due to white people being wealthier than black people. Charlotte O'Neil's Song contains various themes which are; freedom, servitude, change, protest, escape, the past and the future. ...read more.

In Nothing's Changed, there has been no change in District Six from the poet's point of view and the tone is angry. However, in Charlotte O'Neil's Song, the poet is looking forward to change and the tone is much jauntier. Nothing's Changed and Charlotte O'Neil's Song are fundamentally the same - they are set in different places but the servitude is the same. The huge contrast between the two poems is the irony in Nothing's Changed that despite the fact apartheid has ended, segregation still exists due to money; meanwhile Charlotte is capable of changing her life for the better by taking control. In conclusion, the cultures in the poems are different but they share some key elements. Nothing's Changed and Charlotte O'Neil's Song are poems which have been written to act as a form of cultural protest, using different techniques and styles of language. In my opinion both poets portray their views on freedom successfully and the element of protest in each of the poems is communicated to the reader effectively. ?? ?? ?? ?? ...read more.