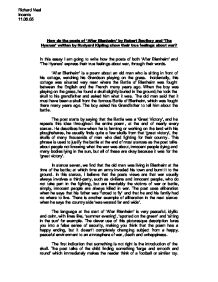 How do the poets of After Blenheim by Robert Southey and The Hyenas written by Rudyard Kipling show their true feelings about war?

How do the poets of 'After Blenheim' by Robert Southey and 'The Hyenas' written by Rudyard Kipling show their true feelings about war? In this essay I am going to write how the poets of both 'After Blenheim' and 'The Hyenas' express their true feelings about war, through their words. 'After Blenheim' is a poem about an old man who is sitting in front of his cottage, watching his Grandson playing on the grass. Incidentally, this cottage was situated very near where the Battle of Blenheim was fought between the English and the French many years ago. When the boy was playing on the grass, he found a skull slightly buried in the ground; he took the skull to his grandfather and asked him what it was. The old man said that it must have been a skull from the famous Battle of Blenheim, which was fought there many years ago. The boy asked his Grandfather to tell him about the battle. The poet starts by saying that the Battle was a 'Great Victory', and he repeats this idea throughout the entire poem, at the end of nearly every stanza. ...read more.

The first indication that something is not right is the introduction of the skull. The poet talks of the child finding something 'large and smooth and round' which immediately makes the reader think of a football or similar toy. When it is revealed that the child has found a skull, this makes us feel very uneasy and we know that this is not a poem about pleasant English summer evenings. The thought of the child, so innocent, playing with something so gruesome as a skull and not realising what it was is very shocking. The language changes again in stanza eight when the poet says, 'And new born baby died' this immediately jerks you into another emotion and situation within the poem. For example when the poet says words like, 'fled', 'died', 'bodies' and 'shocking' and so on, it is especially effective when he says, 'newborn baby died' because the death of someone so very young and completely innocent is very shocking. In 'The Hyenas' the poet talks about the devastation of war, and how it reinforces the unfairness of war on innocent people, e.g. ...read more.

I think he is also using this imagery to compare the soldiers in war to animals fighting for survival in the natural world. Is this what human life has come to as a result of war? Worth nothing except to feed some wild animals? The poet is going one stage further here than he has before in introducing the idea of soldiers being some kind of cattle, sent to war to feed the carrion animals. In both poems, the poets feelings about war is that they are catastrophically phenomenal, and leave hundreds of people without their homes, and without each other, completely destroyed. Wars affect everyone on a large scale. In 'After Blenheim' the poet's thoughts on war, seem, I believe at first, to be the opposite of what 'The Hyenas' is saying because in 'After Blenheim', the poet repeats that the Battle of Blenheim was a huge and great victory for the English. He is saying that he believes that wars always end for one side in a great victory, usually achieved for a good cause but for the other side they are a total failure and the costs are huge. ...read more.