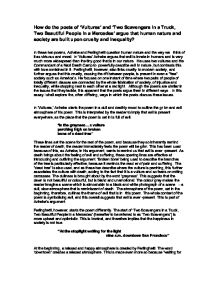 How do the poets of Vultures and Two Scavengers in a Truck, Two Beautiful People in a Mercedes argue that human nature and society are built upon cruelty and inequality?

How do the poets of 'Vultures' and 'Two Scavengers in a Truck, Two Beautiful People in a Mercedes' argue that human nature and society are built upon cruelty and inequality? In these two poems, Achebe and Ferlinghetti question human nature and the way we think of it as virtuous and moral. In 'Vultures' Achebe argues that evil is innate in humans and is very much more widespread than the tiny good that is in our nature. He uses two vultures and the Commandant of a Nazi Death Camp to powerfully describe evil in nature, but contrasts this with love contained in it. Ferlinghetti, however, also links cruelty to modern society, and further argues that this cruelty, causing the rift between people, is present in even a "free" society such as America's. He focuses on one instant of time where two pairs of people of totally different classes are connected by the whole fabrication of society, of injustice and inequality, while stopping next to each other at a red light. Although the poems are similar in the issues that they tackle, it is apparent that the poets argue them in different ways. In this essay I shall explore the, often differing, ways in which the poets discuss these issues. In 'Vultures,' Achebe starts the poem in a dull and deathly mood to outline the grim and evil atmosphere of his poem. This is interpreted by the reader to imply that evil is present everywhere, as the place that the poem is set in is full of evil. 'In the greyness...a vulture perching high on broken bone of a dead tree' These lines set the scene for the rest of the poem, and because they so inherently remind the reader of death, the reader immediately feels the poem will be grim. This has been used because of this, as Achebe, in his argument, wants to remind us that evil is ever-present. ...read more.

However, this also shows more clearly how much more evil there is than love. '...Thus the Commandant at Belsen Camp going home for the day with fumes of human roast clinging rebelliously...and pick up a chocolate for his tender offspring' The image used is just as repulsive as that of the vultures. The word 'roast' makes the reader think of food, and this especially makes the image repulsive, as the reader is shocked at how this evil figure cam live with this. It does make the reader think of cannibalistic behaviour, as roast is used after many other meats. Because 'human roast' is used the reader would think it is ordinary for it to be called this and is therefore furthermore horrified. 'Tender offspring' suggests that they are just meat, like the people that were killed by the Commandant. The word 'tender' in this context is furthermore repulsive, because it is used after 'human roast' and makes the reader imagine it is being used in this context. However, as 'offspring' is used to describe the children of animals, this is also a reference back to the vultures. This suggests that even a human's behaviour is animalistic and it is in his nature, even though he may be seen as evil. Most readers would find that the Commandant at Belsen is more evil than the vultures, as vultures always feed off carcasses. However, this link back to animals, with 'offspring' makes the reader question whether all creation is purely evil, regardless of what species there are and how much love they have for something else. This further implies that evil is always predominant over other characteristics such as love. This is another one of Achebe's points in his argument that suggests that human nature, and the nature of all creation, is predominantly built upon cruelty. With this contrast, showing a loving family man, Achebe indirectly asks the reader whether they think his evil is redeemable, and therefore if they would forgive the Commandant at Belsen because of his love for his child(ren). ...read more.

The 'small gulf' is also a pun, as it means the physical distance between the four people, but also the large gap in class and wealth between the two pairs of people - a gulf is geographically very large. 'The high seas' suggests that it is happening everywhere, as the oceans are very large and cover many areas. This further strengthens the effect of the class gap and also fits in with the entertaining line 'the small gulf'. The last line is also highly critical, as it asks why people are not equal if they are meant to be in the democracy. This line also refers to this as being a problem across the whole of America and the whole society, which further strengthens the argument that all the people are not equal. It strongly and ironically suggests that the democracy is unfair and unjust. These are related to cruelty, as the people of America, Ferlinghetti believes, are being treated cruelly, being wrongly told, and believing that they are all equal, when Ferlinghetti sees clearly that they are not. People are told that they are free in a democracy, but Ferlinghetti, in this poem, argues that this is far from the case. Ferlinghetti and Achebe explore issues within their cultures, and link them to different examples. However, analytically, while their use of language and techniques may not be similar, it must not be forgotten that these poems remind us, and depict, the worst and most scarring side of Man's character, and remind us how misguided and flawed our judgements on ourselves can be. What we must learn from them is that we cannot think ourselves above creation if we show the same repulsive habits as vultures, however slight these may be. Ferlinghetti and Achebe argue that unless we totally conquer the evil and cruelty so centrally bound within us and change the society we have built around them, we cannot call ourselves more than any other being. ?? ?? ?? ?? ...read more.